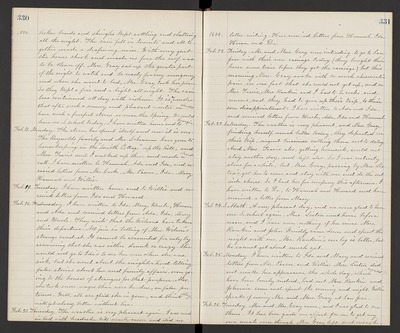 1884. broken boards and shingles kept rattling and clattering all the night. The rain fell in torrents and all together made a deafening noise. With every gust the house shook and made us fear the roof was to be blown off. Mrs. Gray sat up the greater part of the night to watch and be ready for any emergency and when she went to bed, Mr. Gray took her place. So they kept a fire and a light all night. The rain has continued all day with violence. It is a wonder that after such a sunny and pleasant winter we should have such a fearful storm so near the Spring. We could have no S. school today. I have written home and to Georgie.

Feb. 18. Monday. The storm has spent itself and now it is over. The Reynolds family and Mr. Schramm have gone to housekeeping in the "Smith Cottage" up the hill, and Mrs. Travis and I walked up there and made a short call. I have written to Hannah, Ada and Ida, and received letters from Mr. Cooke, Mr. Pascoe, Ida, Mary, Hannah and Willie.

Feb. 19. Tuesday. I have written home and to Willie and received letters from Ida and Howard.

Feb. 20. Wednesday. I have written to Ida, Mary, Uncle, Horace and Ada and received letters from Ada, Ida, Mary and Uncle. They write that the Wilsons have taken their departure. All join in telling of Mrs. Wilson's strange conduct. It cannot be accounted for only by assuming that she was either drunk or crazy. She would not go to Ida's to see her even when she was sick, but she went about the neighborhood telling false stories about her and family affairs, even going to the houses of strangers for that purpose. Also, she took more wages than were her due, on false, pretences, Well, all are glad she is gone, and think they will get along better without her.

Feb. 21. Thursday. The weather is very pleasant again. I was sick in bed with headache till nearly noon and did no

Feb. 22. Friday. Mr. and Mrs. Gray were intending to go to San Jose with their new carriage today (they bought their horse some time before they got the carriage) but this morning Mrs. Gray awoke with so much rheumatic pain in one foot that she could not get up, and so Mrs. Travis, Mrs. Rankin and I had to be cooks and nurses, and they had to give up their trip, to their sore disappointment. I have written to Ada and Ida, and received letters from Uncle, Ada, Ida and Hannah.

Feb. 23. Saturday. The weather is very pleasant, and Mrs. Gray, finding herself much better today, they departed on their trip, urgent business calling them not to delay. And Mrs. Travis also, getting homesick, could not stay another day, and left also. So I was entirely alone for a while, but Mrs. Gray, passing by Mrs. Liston's, got her to come and stay with me and do the outside chores. So I had her for company this afternoon. I have written to Dr., to Hannah and Howard and have received a letter from Mary.

Feb. 24. Sabbath. A very pleasant day, and we were glad to have our S. school again. Mrs. Liston went home before noon, and I have seen nothing of her since. Mrs. Rankin and John kindly came down and spent the night with me. Mr. Rankin's sore leg is better, but he cannot get about much yet.

Feb. 25. Monday. I have written to Ida and Mary and received letters from Mr. Pascoe and Willie. Mrs. Liston did not make her appearance the whole day, which would have been lonely indeed, had not Mrs. Rankin and Johnnie come and spent the evening and night. Willie speaks of seeing Mr. and Mrs. Gray at San Jose.

Feb. 26. Tuesday. Mr. and Mrs. Gray came, and I was glad to see them. It has been quite an effort for me to get my own meals even though Mrs. Gray left food enough