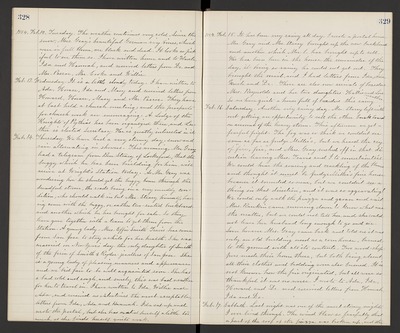 1884. Feb. 12. Tuesday. The weather continues very cold. Since the snow, Mrs. Gray's beautiful German ivy vines, which were in full bloom, are black and dead. It looks so pitiful to see them so. I have written home and to Uncle, Ida and Hannah, and received letters from Dr. and Mr. Pascoe, Mr. Cooke and Willie.

Feb. 13. Wednesday. It is a little cloudy today, I have written to Ada, Horace, Ida and Mary and received letters from Howard, Horace, Mary and Mr. Pascoe. They have at last held a church meeting, and the prospects for church work are encouraging. A Lodge of the Knights of Pythia's has been organized there, and Luther is elected Secretary. He is greatly interested in it.

Feb. 14. Thursday. We have had a very stormy day, snow and rain alternating in showers. This morning, Mr. Gray had a telegram from Ben Steacy of Lockeford, that the buggy which he has been building for him, will arrive at Wright's Station today. As Mr. Gray was wondering how he should get the buggy home through the dreadful storm, the roads being in a very muddy condition, who should walk in but Mr. Steacy himself, having come with the buggy, or rather two seated buckboard and another which he has brought for sale. So they have gone together with a team to get them from the Station. A young lady - Mrs. Effie Smith Travis - has come from San Jose to stay awhile for her health. She was married on New Years' day - the only daughter of Smith of the firm of Smith & Ryder - jewellers of San Jose. She is young lady of pleasing manners and appearance and we bid fair to be well acquainted soon. She has a bad cold and cough, and surely this was bad weather for her to travel in. I have written to Ida, Willie and Ada, and received as valentines the most acceptable, letters from Ida, Ada and Hannah. Ida sat up and wrote the postal, but she has excited herself a little too much, as she finds herself quite weak.

1884. Feb. 15. It has been very rainy all day. I wrote a postal home. Mr. Gray and Mr. Stacey brought up the new buckboard and another which Mr. S. has brought up to sell. He has been here in the house the remainder of the day, it being so rainy he could not get out. They brought the mail, and I had letters from Ida, Ada Uncle and Dr. There are also new arrivals of boarders. Mrs. Reynolds and her two daughters, Hattie and Lou. So we have quite a house full of boarders this rainy weather.

Feb. 16. Saturday. Another very rainy day. Mr. Stacey left with out getting an opportunity to sell the other buckboard an account of the heavy storm. This afternoon we got a fearful fright. The fog was so thick we couldn't see even as far as Judge Miller's, but we heard the cry of "fire, fire", and Mrs. Gray rushed off in that direction leaving Mrs. Travis and I to uncertainties. We could hear the roaring and crackling of the flames and thought it must be Judge Miller's fine house because it sounded so near, but we couldn't see a thing in that direction, and it was so aggravating! We could only walk the piazza and groan and wait Mrs. Rankin came running down to know what was the matter, but we could not tell her, and she could not leave her husband long enough to go and see. Soon however Mrs. Gray came back and told us it was only an old building used as a corn house, burned to the ground with all its contents. Two wood croppers made their home there, but both being absent, all their clothes and bedding were also burned. It is not known how the fire originated, but all were so thankful it was no worse. I wrote to Ada, Ida, Howard and Dr. and received letters from Hannah, Ida and Dr.

Feb. 17. Sabbath. Last night was one of the most stormy nights I ever lived through. The wind blew so fearfully that a part of the roof of the piazza was broken up, and the