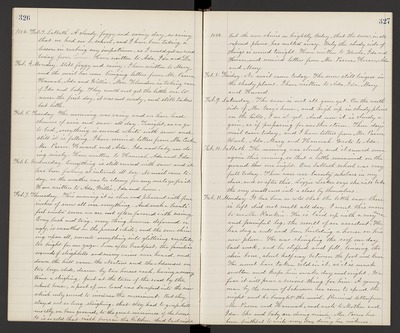 1884. Feb. 3. Sabbath. A cloudy, foggy and rainy day, so rainy that we had no S. school, and I have been taking a lesson in curbing my impatience, as I could get no word today from home. Have written to Ada, Ida and Dr.

Feb. 4. Monday. Still foggy and rainy. I have written to Mary and the mail has come bringing letters from Mr. Pascoe, Hannah, Ada and Willie. Mrs. Flanders is taking care of Ida and baby. They could not get the little one to nurse the first day, it was not ready, and still takes but little.

Feb. 5. Tuesday. The morning was rainy and we have had showers of rain and snow all day. Tonight, as we go to bed, everything is covered white with snow and still it is falling. I have receied letters from Mr. Cooke, Mr. Pascoe, Howard and Ada. Ida and baby are doing nicely. Have written to Hannah, Ada and Ida.

Feb. 6. Wednesday. Everything is still covered with snow and it has been falling at intervals all day. No mail came today, as the weather was too stormy for any one to go for it. Have written to Ada, Willie, Ida and home.

Feb. 7. Thursday. This morning it is clear and pleasant with four inches of snow all over everything. And such a beautiful winter scene we are not ofthe favored with seeing. Every bush and twig, every thing, however deformed or ugly, is mantled in the purest white, and the sun shining upon all, converts everything into glittering crystals, too bright for our gaze. Soon after breakfast, the familiar sounds of sleighbells and merry voices were heard, and down the hill came thr Nortons and the Adamses on two large slids, drawn by two horses each, having a merry time a sleighing. Just at the turn of the road by the school house, a part of one load was dumped into the snow which only served to increase the merriment. But they stayed out so long sleighing, that they had to go up hill mostly on bare ground, to the great weariness of the horses. It is so cold that milk froze in the kitchen shed last night.

1884. but the sun shines so brightly today, that the snow, in all exposed places, has melted away. Only the shady side of things is covered tonight. Have written to Uncle, Ida and Horace, and received letters from Mr. Pascoe, Horace, Ada and Mary.

Feb. 8. Friday. No mail came today. The snow still lingers in the shady places. I have written to Ada, Ida, Mary and Howard.

Feb. 9. Saturday. The snow is not all gone yet. On the north side of Mr. Gray's house, and high up in shady places on the hills, I see it yet. And now it is cloudy again, as if preparing for another storm. Three days mail came today, and I have letters from Mr. Pascoe, Uncle, Ada, Mary and Hannah. Wrote to Ada.

Feb. 10. Sabbath. The morning was cloudy and it snowed some again this evening, so that a little remained on the ground over night. Our Sabbath school was very full today. There were over twenty scholars in my class, and so after this, Lizzie Leeker says she will take the very small ones into a class by themselves.

Feb. 11. Monday. It has been so cold that the little snow there is left did not melt all day. I went this morn to see Mr. Rankin. He is laid up with a very sore and painful leg. the result of an accident. He has dug a well and been building a house on his new place. He was shingling the roof one day last week, and he slipped and fell, bruising the skin bone, about half way between the foot and knee. He must have taken cold in it, as it is much swollen and keeps him awake day and night. We fear it will prove a serious thing for him. A young man by the name of Schramm has come to spend the night and he brought the mail. Received letters from Mr. Pascoe and Hannah, and wrote to Mother and Ida. She and baby are doing nicely. Mr. Pascoe has been faithful to write every day during her sickness.