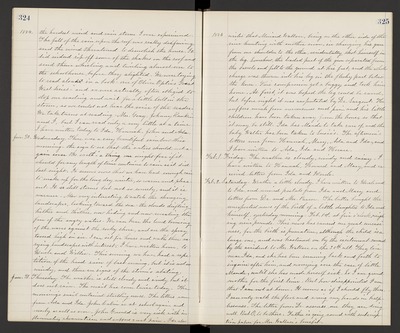 1884. the hardest wind and rain storm I ever experienced. The fall of the rain upon the roof was really deafening, and the wind threatened to demolish the house. It did indeed rip off some of the shakes on the roof and send them whirling and twirling almost over to the schoolhouse, before they alighted. We were trying to read aloud in a book - one of "Oliver Optic's Great West Series" - and we were actually often obliged to stop our reading and wait for a little lull in the storm, as we could not hear the voice of the reader. We take turns at reading, Mr. Gray, Johnny Rankin and I, but I can read only a very little at a time. I have written today to Ida, Hannah, John and Ada.

Jan. 30. Wednesday. There was a very beautiful rainbow this morning, the sign to us that the "waters should not again cover the earth" - a thing one might fear if it should for any length of time continue to rain as it did last night. It seems now that we have had enough rain to make up for the long day winter, so warm and pleasant. It still storms but not so severely, and it is warmer. Also very interesting to watch the changing landscapes, looking toward the sea - the clouds drifting hither and thither, now hiding and now revealing the face of the angry waters. We can hear the loud booming of the waves against the rocky shore, and see the spray tossed high in air. I can sit for hours and watch these varying landscapes with interest. I have written home, to Uncle and Willie. This evening we have had a repetition of the hard rain of last evening, but it is not so windy, and there are signs of the storm's abating.

Jan. 31. Thursday. The weather is still cloudy and windy but it does not rain. The mail has come twice today. The morning's mail contained startling news. The letters were from Ada and Ida. John Cabin is at school again and nearly as well as ever. John Grould is very sick with inflammatory rheumatism and suffers great pain. Ida also

1884. writes that Minard Wallace, being on the other side of the river hunting with another man, in changing his gun from one shoulder to the other, accidentally shot himself in the leg. Somehow, the loaded part of the gun separated from the barrels and fell to the ground at his feet, and the whole charge was thrown into his leg in the fleshy part below the knee. His companion got a buggy and took him home. At first, it was hoped the leg could be saved, but before night it was amputated by Dr. Sargent. He suffers much from nervousness and pain and his little children have been taken away from the house, so that it may be still. Ida has Mande to take care of and the baby Walter has been taken to Susie's. The afternoon's letters were from Hannah, Mary, Ada and Ida, and I have written to Ada, Ida and Horace.

Feb. 1. Friday. The weather is cloudy, windy and rainy. I have written to Hannah, Howard and Mary, and received letters from Ida and Uncle.

Feb. 2. Saturday. Weather a little cloudy. I have written to Uncle and to Ida, and received postals from Ida and Mary and letters from Dr. and Mr. Pascoe. The latter brought the unexpected news of the birth of a little daughter to Ida and himself, yesterday morning, Feb. 1st at five o'clock, weighing nine pounds. This news has caused one great uneasiness, for the birth is premature, although the child is a large one, and was hastened on by the excitement caused by the accident to Mr. Wallace on the 30th ult. They live near Ida, and she has been running back and forth to inquire after him, and worrying over the care of little Mande, until she has made herself sick. So I am grandmother for the first time. But how disappointed I am that I am not at home. It seems as if I should fly there. I can only walk the floor and wing my hands in helplessness. The letter from Dr. assures me they are doing well. But O, to be there. Father is going round with subscription paper for Mr. Wallace's benefit.