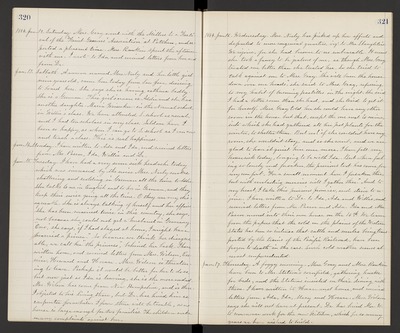 1884. Jan. 12. Saturday. Mrs. Gray went with the Millers to a Festival of the "Fruit Growers' Association" at Patchen, and reported a pleasant time. Mrs. Rankin spent the afternoon with me. I wrote to Ida and received letters from her and from Dr.

Jan. 13. Sabbath. A woman named Mrs. Neely and her little girl nine years old, came here today from San Jose, desiring to board here. She says she is having asthma badly. She is a German. This girls' name is Addie and she has another daughter - Maria Weisecker - in the Normal school, in Willie's class. We have attended S. school as usual, and I had ten scholars in my class. Seldom have I been so happy, as when I can go to S. school as I can now and teach a class. This is real happiness.

Jan. 14. Monday. I have written to Ada and Ida, and received letters from Mr. Pascoe, Ida, Willie and Dr.

Jan. 15. Tuesday. I have had a very severe sick headache today which was increased by the noise Mrs. Neely makes chattering and scolding in German all the time to Addie. She talks to us in English and to her in German, and they keep their noise going all the time. O they are very disagreeable. She is always talking of herself and her affairs. She has been married twice in his country, she says, not because she could not get a husband in Germany. "O no, she says, "if I had stayed at home, I might have married a prince." So because we think her disagreeable, we call her "the princess", behind her back. I have written home, and received letters from Mrs. Wilson, Eunice, Howard and Grace. Mrs. Wilson is threatening to leave. Perhaps it would be better for her to do so, but now just as Ida is leaving, she is the more needed. Mrs. Wilson has come from New Hampshire, and is there. I objected to his living there, but Dr. has hired him as carpenter for awhile. I fear there will be trouble, as no house is large enough for two families. The children make many complaints against her.

1884. Jan. 16. Wednesday. Mrs. Neely has picked up her effects and departed to more congenial quarters, viz! to Mrs. Slaughter's. We rejoice, for she had become to us unbearable. It seems she took a fancy to be jealous of me, as though Mrs. Gray treated me better than she treated her. So she tried to talk against me to Mrs. Gray. "She will burn the house down over our heads", she said to Mrs. Gray, referring to my habit of burning pastilles in the night. She said I had a better room than she had, and she tried to get it for herself. Mrs. Gray told her she could have any other room in the house but that, except the one next to mine, into which she had gathered all her pot plants for the winter, to shelter them. But no! if she couldn't have my room, she wouldn't stay, and so she went, and we are glad to have it quiet here once more. I have felt very homesick today, longing to be with Ida. But when feeling so lonely and forsaken, the precious text has come for my comfort, "For a small moment have I forsaken thee, but with everlasting mercies will I gather thee." And to my heart, I take this precious promise, and strive to rejoice. I have written to Dr. to Ida, Ada and Willie, and received letters from Mr. Pascoe and Ada. Ida and Mr. Pascoe moved into their own house on the 14th. We learn from the papers that the cold on the plains of the Western States has been so intense that cattle and mules being transported by the trains of the Pacific Railroad, have been frozen to death in the cars. Such cold weather seems almost unprecedented.

Jan. 17. Thursday. A foggy morning. Mrs. Gray and Mrs. Rankin have been to Mr. Stetson's cornfield, gathering husks for beds, and the Stetsons insisted on their dining with them. I have written to Horace and home, and received letters from Ada, Ida, Mary and Horace. Mrs. Wilson says she will not leave at present. Dr. has hired Mrs. Wilson to commence work for the new kitchen, which for so many years we have wished to build.