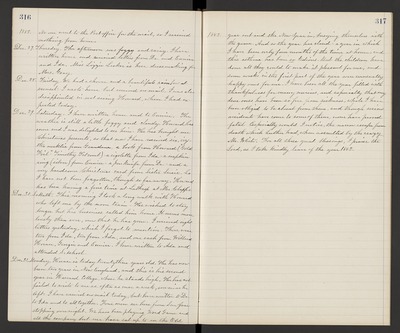 1883. No one went to the Post office for the mail, so I received nothing from home.

Dec. 27. Thursday. The afternoon was foggy and rainy. I have written home and received letters from Dr. and Eunice and Ida. Miss Lizzie Leeker is here dressmaking for Mrs. Gray.

Dec. 28. Friday. We had a shower and a beautiful rainbow at sunset. I wrote home but received no mail. I was also disappointed in not seeing Howard, whom I had expected today.

Dec. 29. Saturday. I have written home and to Eunice. The weather is still a little foggy and cloudy. Howard has come and I was delighted to see him. He has brought me Christmas presents, so that now I have received six, viz. - the necktie from Grandma, a book from Howard ("Gold Foil"-Timothy Titcomb) - a rigolette from Ida - a napkin ring (silver) from Eunice - a pen knife from Dr. - and a very handsome Christmas card from Sister Susie. So I have not been forgotten, though so far away. Howard has been having a fine time at Lathrop at Mr. Clapp's.

Dec. 30. Sabbath. This morning I took a long walk with Howard who left me by the noon train. He wished to stay longer but his business called him home. It seems more lonely than ever, now that he has gone. I received eight letters yesterday, which I forgot to mention. There were two from Ida, two from Ada, and one each from Willard, Horace, Georgie and Eunice. I have written to Ada and attended S. school.

Dec. 31. Monday. Horace is today twentythree years old. He has now been two years in New England, and this is his second year in Harvard College, where he stands high. Her has not failed to write to me as often as once a week, ever since he left. I have received no mail today, but have written to Dr. to Ida and to all together. Four men are here from San Jose stopping over night. We have been playing Word Game and all the company but me have sat up to see the Old

1883. year out and the New Year in, busying themselves with the game. And so the year has closed - a year in which I have been only four months of the time at home, and this asthma has been so tedious. But the children have done all they could to make it pleasant for me, and some weeks in the first part of the year were unusually happy ones for me. I have been all the year filled with thankfulness for many mercies, and especially that my dear ones have been so free from sickness, while I have been obliged to be absent from them, and though serious accidents have come to some of them, none have proved fatal. Especially would I notice, the narrow escape from death which Luther had, when assaulted by the crazy Mr. White. For all these great blessings, I praise the Lord, as I take kindly leave of the year 1883.