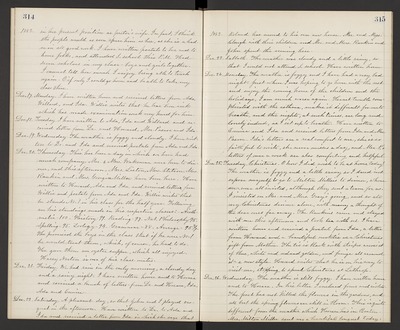 1883. in her present position as pastor's wife. In fact, I think the people would as soon spare him as her, as she is a leader in all good work. I have written postals to her and to home folks, and attended S. school this P.M. Had seven scholars in my class - boys and girls together. I cannot tell how much I enjoy being able to teach again. O if only I could go home and be able to take my class there.

Dec. 17. Monday. I have written home and received letters from Ada, Willard, and Ida. Willie writes that he has been sick which has made examination week very hard for him.

Dec. 18. Tuesday. I have written to Ada, Ida and Willard and received letters from Dr. and Howard, Mr. Pascoe and Ida.

Dec. 19. Wednesday. The weather is foggy and cloudy. I have written to Dr. and Ida and received postals from Ada and Ida.

Dec. 20. Thursday. This has been a day in which we have had much company. Mr. & Mrs. Wakeman were here to dinner, and this afternoon, Mrs. Liston, Mrs. Stetson, Mrs. Rankin and Mrs. Georgia Miller have been here. Have written to Howard, Ada and Ida and received letters from Willie and postals from Ada and Ida. Willie writes that he stands No. 1 in his class for the half year. Following are his standings made in his respective classes! Arithmetic - 100. History - 99. Reading - 97. Nat. Philosophy - 95. Spelling - 95. Zoology - 94. Grammar - 88. Average - 95 3/7. He promised the boys in the class that if he were No. 1 he would treat them, which, of course, he had to do. He gave them an oyster supper, which all enjoyed. Harry Norton is one of his classmates.

Dec. 21. Friday. We had rain the early morning, a cloudy day and a rainy night. I have written home and to Horace and received a bunch of letters from Dr. and Horace, Ida, Ada and Eunice.

Dec. 22. Saturday. A pleasant day, so that John and I played croquet in the afternoon. Have written to Dr. to Ada and Ida and received a letter from Ida in which she says that

1883. Ronald has moved to his own new house. Mr. and Mrs. Clough with their children and Mr. and Mrs. Rankin and Jon spent the evening here.

Dec. 23. Sabbath The weather was cloudy and a little rainy, so that I could not attend S. school. Have written home.

Dec. 24. Monday. The weather is foggy and I have had a very bad night. Just when I was hoping to go home with the rest and enjoy the coming home of the children and the holidays, I am much worse again. Heart trouble complicated, with the asthma, makes it difficult for me to breathe, and the nights, at such times, are long and lonely indeed, as I sit up to breathe. Have written to Eunice and Ida and received letters from Ida and Mr. Pascoe. Ida's letters are a real comfort to me, she is so faithful to write, she never misses a day, and Mr. P's letters of once a week are also comforting and helpful.

Dec. 25. Tuesday. Christmas. O how I did wish to be at home today! The weather is foggy and a little rainy so I dared not expose myself to go to Milton Millers to dinner, where we were all invited, although they sent a team for us. I insisted on Mr. and Mrs. Gray's going, and so ate my Christmas dinner alone, with many a thought of the dear ones far away. The Rankins came and stayed with me this afternoon and took tea with us. I have written home and received a postal from Ida, a letter from Howard and beautiful necktie as a Christmas gift from Mother. The tie is black with stripes across it of blue, white and red and golden, and fringe all around it - a new style. Howard writes that he is on his way to visit me, stopping to spend Christmas at Lathrop.

Dec. 26. Wednesday. The weather is still foggy. I have written home and to Horace. In his letter I enclosed ferns and violets. The frost has not killed the flowers in the gardens, and all but the spring flowers are still in bloom. This is quite different from the weather which Horace has in Boston. Mrs. Milton Miller sent me a beautiful bouquet today.