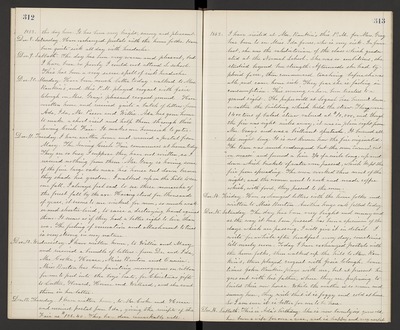 1883. the day here. It has been very bright, sunny and pleasant.

Dec. 8. Saturday. Have exchanged postals with the home folks. Have been quite sick all day with headache.

Dec. 9. Sabbath. The day has been very warm and pleasant, but I have been so poorly I could not attend S. school. This has been a very severe spell of sick headache.

Dec. 10. Monday. Have been much better today - walked to Mrs. Rankin's, and this P.M. played croquet with Josie Clough on Mrs. Gray's pleasant croquet ground. Have written home and received quite a batch a letters - from Ada, Ida, Mr. Pascoe and Willie. Ada has gone home to make a short visit and help them through their Sewing Circle Fair. It makes me homesick to go too.

Dec. 11. Tuesday. I have written home and received a postal from Mary. The Sewing Circle Fair commences at home today. They are so busy I suppose they have not written, as I received nothing from them. Mr. Gray is having some of the fine large oaks near his house cut down because they shade his garden. I walked up on the hill to see one fall. I always feel sad to see these monarchs of the forest fall by the axe. Having stood for thousands of years, it seems to me wicked for men, so much weaker and shorter-lived, to raise a destroying hand against them. It seems as if they had a better right to live than we. The feeling of veneration and attachment to trees is very strong in my nature.

Dec. 12. Wednesday. I have written home, to Willie and Mary and received a bundle of letters - from Dr. and Ida, Mr. Cooke, Horace, Miss Benton and Eunice. Miss Benton has been painting monograms on ribbon for me to put into the boys' hats, for Christmas gifts to Luther, Howard, Horace and Willard, and she sent them in her letter.

Dec. 13. Thursday. I have written home, to Mr. Cooke and Horace and received postal from Ida, giving the receipts of the Fair as $126.40. They have done remarkably well.

1883. I have visited at Mr. Rankin's this P.M. for Mrs. gray has been to see Miss Ida Jones, who is very sick. In June last, she was the valedictorian of the class which graduated at the Normal School. She was so ambitious, she studied beyond her strength. Afterwards she had typhoid fever, then commenced teaching before she was able, and came home sick. They fear she is failing in consumption. This evening we have been treated to a grand sight. The paper mill at Soquel has burned down, or rather the building which held the straw. There were 1400 tons of baled straw valued at $10,000, and though the fire was eight miles away, it was in plain sight from Mr. Grays and was a brilliant spectacle. It burned all the night long. It is not known how the fire originated. The town was much endangered but the men turned out "en masse" and formed a line 3/4 of a mile long, up and down which buckets of water were passed, which kept the fire from spreading. The men worked thus most of the night, and the women went to work and made coffee which, with food, they passed to the men.

Dec. 14. Friday. Have exchanged letters with the home folks and written to Miss Benton. Another huge oak felled today.

Dec. 15. Saturday. The day has been very bright and sunny and as the way it has been passed has been a specimen of the days which are passing, I will give it in detail. I write for awhile after breakfast every day, sometimes till nearly noon. Today I have exchanged postals with the home folks, then walked up the hill to Mrs. Rankin's, then played croquet with Josie Clough. Sometimes John Rankin plays with me, but at present he goes out with his father, where they are preparing to build their new house. While the weather is so warm and sunny here, they write that it is foggy and cold at home. So I am sure it is better for me to be here.

Dec. 16. Sabbath. This is Ada's birthday. She is now twenty six years old, has been a wife for over a year, and is happy and very useful