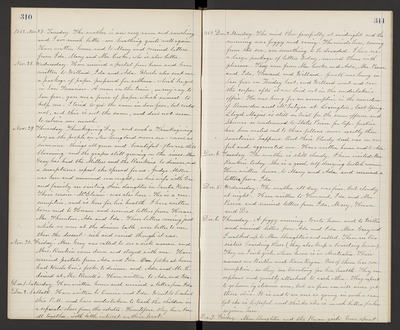 1883. Nov. 27. Tuesday. The weather is now very warm and sunshiny and I am much better - am breathing quite well again. Have written home and to Mary and received letters from Ida, Mary and Mr. Cooke, who is also better.

Nov. 28. Wednesday. Have received a postal from home and have written to Willard, Ida and Ada. Uncle also sent me a package of paper prepared for asthma, which he got in San Francisco. A man on the train, on my way to San Jose, gave me a piece of paper which seemed to help me. I tried to get the same in San Jose, but could not, and this is not the same, and does not seem to relieve me much.

Nov. 29. Thursday. Thanksgiving Day, and such a Thanksgiving day as the people in New England never see - warm as summer - things all green and beautiful - flowers still blooming - and the grapes still growing on the vines. Mrs. Gray has had the Millers and the Rankins to dinner, and a sumptuous repast she spread for us. Judge Miller was here and remained overnight, as his wife with Geo. and family are visiting their daughter in Santa Rosa. Their cousin - McElwain - was also here. He is a consumptive, and is here for his health. I have written home and to Horace, and received letters from Horace, Mr. Thornton, Ada and Ida. These letters coming just while we were at the dinner table, were better to me than the dessert - rich and varied though it was.

Nov. 30. Friday. Mrs. Gray was called to see a sick woman and Mrs. Rankin came down and stayed with me. Have received postals from Ada and Ida. Our folks at home had Uncle Geo.'s folks to dinner and Ada and Mr. C. dined at Mr. Rowell's. Have written to Ada and Ida.

Dec. 1. Saturday. Have written home and received a letter from Ida.

Dec. 2. Sabbath. Have written to Eunice and Ida. Went to S. school this P.M. and have undertaken to teach the children in a separate class from the adults. Heretofore they have been all together, with little interest on their past.

1883. Dec. 3. Monday. The wind blew fearfully at midnight and the morning was foggy and rainy. The winds here, coming from the sea, are something to be dreaded. I have rec. a large package of letters today, received them with pleasure. They were from Mr. Cooke and Ada, Mr. Pascoe and Ida, Howard and Willard. Jewell was hung in San Jose on Friday last, and Willard went and saw the corpse after it was laid out in the undertaker's office. He was hung for accomplice in the murders of Renowden and McIntyre at Lexington, last Spring. Lloyd Majors is still on trial for the same offence and Showers is condemned to States Prison for life. Justice has been meted out to these fellows more exactly than sometimes happens. But their bloody deed was an awful and aggravated one. Have written home and to Ada.

Dec. 4. Tuesday. The weather is still cloudy. I have visited Mrs. Rankin today. She is a good, self-denying Scotch woman. Have written home, to Mary and Ada and received a letter from Ida.

Dec. 5. Wednesday. The weather all day was fine, but cloudy at night. Have written to Howard, Ida and Mr. Pascoe and received letters from Ida, Mary, Horace and Dr.

Dec. 6. Thursday. A foggy morning. Wrote home and to Willie and received letters from Ada and Ida. Mrs. Gray and I walked up to Mrs. Slaughter's and called. There are two sisters boarding there (they also keep a boarding house). They are Irish girls, whose home is in Australia. Their names are Bertha and Rosa Ryan. One of them has consumption, so they are traveling for her health. They are orphans and greatly attached to each other. They expect to go home by steamer soon, but we fear one will never get there alive. It is sad to see one so young in such a case, Yet she is hopeful and thinks she is much better for her sojourn here.

Dec. 7. Friday. Mrs. Slaughter and the Ryan girls have spent