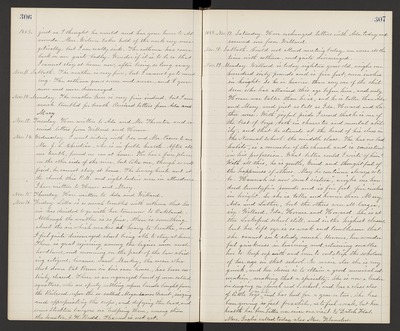 1883. just as I thought he would and has gone home to Alameda. Mrs. Wilson takes hold of the work very energetically, but I am really sick. The asthma has come back on me quite badly. Wonder if it is to be so that I cannot stay at home now, after being so long away.

Nov. 11. Sabbath. The weather is very fine, but I cannot go to meeting. The asthma grows worse and worse, and I grow more and more discouraged.

Nov. 12. Monday. The weather here is very fine indeed, but I am much troubled for breath. Received letters from Ada and Mary.

Nov. 13. Tuesday. Have written to Ada and Mr. Thornton and received letters from Willard and Horace.

Nov. 14. Wednesday. I went riding with Ida and Mr. Pascoe to see Mr. J. L. Christian, who is in feeble health. After all our trouble, found no one at home. He has a fine place on the other side of the river, but like me, though so well fixed, he cannot stay at home. The Sewing Circle met at the church this P.M. and eight ladies were in attendance. I have written to Horace and Mary.

Nov. 15. Thursday. Have written to Ada and Willard.

Nov. 16. Friday. Lilla is so much trouble with asthma that Susie has decided to go with her tomorrow to Oakland. Although the weather is so fine, there is something about the air which makes it heavy to breathe, and I feel quite discouraged about being able to stay at home. There is great rejoicing among the liquor men and hoodlums, and mourning on the part of the law abiding citizens, because Saml. Mackey, the man who shot down Pat Breen in his own house, has been entirely cleared. There is an organized band of men called squatters, who are openly settling upon lands bought from the Railroad, upon the so-called Moquelemos Grant, seizing and appropriating the crops, and defying the laws, and some Stockton lawyers are helping them, among them the Senator, J. H. Budd. The end is not yet.

1883. Nov. 17. Saturday. Have exchanged letters with Ada today and received one from Willard.

Nov. 18. Sabbath. Could not attend meeting today, am worse all the time with asthma, and quite discouraged.

Nov. 19. Monday. Willard is today eighteen years old, weighs one hundred sixty pounds and is five feet, seven inches in height. So he is heavier than any one of the children who has attained this age before him, and only Horace was taller than he is, and he is taller than Ada and Mary, and just as tall as Ida, Howard and Luther were. With joyful pride I record that he is one of the best of boys, both in character and mental ability, and that he stands at the head of his class in the Normal School - the middle class. He has no bad habits, is a member of the church and is consistent in his profession. What better could I write of him? With all this, he is gentle, kind and thoughtful of the happiness of others. May he continue always so to be. Hannah is now "sweet sixteen", weighs one hundred twentyfive pounds and is five feet, five inches in height. So she is taller and heavier than Mary, Ada and Luther, but the others were all larger, viz. - Willard, Ida, Horace and Howard. She is at the Lockeford school still, and in the highest classes, but her left eye is so weak and troublesome that she cannot see to study much. However, her wonderful quickness in learning and retaining enables her to keep up with and even to outstrip the scholars of her age in that school. In music also she is very quick, and her desire is to obtain a good musical education, making that a specialty. She is now a leader in singing in church and S. school, and has a class also of little boys in S.S., and has had for a year or two. She has been growing so fast for a while, as to feel weak, but her health has been better ever since our visit to Dutch Flat. Mrs. Inglis called today also Mrs. Flanders.