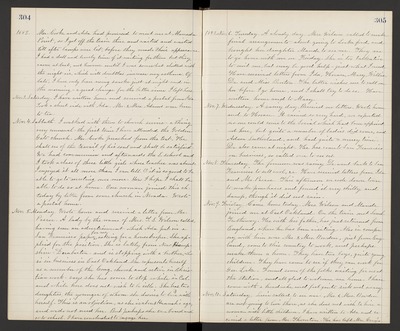 1883. Mr. Cooke and Ada had promised to meet me at Alameda Point, so I got off the train there waited and waited till after lamps were lit, before they made their appearance. I had a dull and lonely time of it waiting for the but they came at last, not however until I was somewhat chilled with the night air, which will doubtless increase my asthma. Of late, I have only been using smoke just at night and in the morning, a great change for the better since I left here.

Nov. 3. Saturday. I have written home and received a postal from Ida. Took a short ride with Ada. Mr. & Mrs. Adams were here to tea.

Nov. 4. Sabbath. I walked with them to church service - a thing very unusual - the first time I have attended the Golden Gate church. Mr. Cooke preached from the text, "He shall see of the to travail of his soul and shall be satisfied." We had communion and afterward the S. school and I took a class three little girls whose teacher was absent. I enjoyed it all more than I can tell. O it is so good to be able to go to meeting once more. How I hope I shall be able to do so at home. One woman joined this ch. today by letter from some church in Nevada. Wrote a postal home.

Nov. 5. Monday. Wrote home and received a letter from Mr. Pascoe. A lady by the name of Mrs. T. S. Wilson called, having seen an advertisement which Ada put in a San Francisco paper for me, asking for a housekeeper. She applied for the position. She is lately from New Hampshire - Dornbarton - and is stopping with bother, who is in business in East Oakland. She represents herself as a member of the Cong. church and active in Christian work - says she has come to stop awhile in Cal. and while here does not wish to be idle. She has two daughters, the younger of whom she desires to live with herself. This is an objection, as she is about Hannah's age, and we do not need her. But perhaps she can board and go to school. I have concluded to engage her.

1883. Nov. 6. Tuesday. A cloudy day. Mrs. Wilson called to make final arrangements about going to Lockeford, and brought her daughter Mande to see me. They are to go home with me on Friday. She is too talkative to suit me, but may be good help - just what I need. Have received letters from Ida, Horace, Mary, Willie, Dr and Miss Benton. The latter wishes me to call on her before I go home, and I shall try to do so. Have written home and to Mary.

Nov. 7. Wednesday. A rainy day. Received no letters. Wrote home and to Horace. It rained so very hard, we expected no one could come to the Social which had been appointed here, but quite a number of ladies did come, and Adam Sutherland, and had quite a merry time. Dr. also came at night. He has come to San Francisco on business, so called over to see us.

Nov. 8. Thursday. The forenoon was rainy. Dr. went back to San Francisco to sell wool, &.c. Have received letters from Ida and Mr. Pascoe. This afternoon we rode down town to make purchases and found it very chilly and damp, though it did not rain.

Nov. 9. Friday. Came home today. Mrs. Wilson and Mande joined me at East Oakland. On the train met Saml. Tutheway, He with his father, has just returned from England, where he has been visiting. Also in company with him were Mr. & Mrs. Bowden, just from England, come to this country to work, and perhaps make them a home. They have two boys, quite young children. They have come to see if they can work for Geo. Locke. Found some of the folks waiting for us at the Station, and all glad to welcome me home. I have come with a headache and feel quite sick and weary.

Nov. 10. Saturday. Susie called to see me. Mr. & Mrs. Bowden are not going to live there, as she does not wish to hire a woman with little children. I have written to Ada and received a letter from Mr. Thornton. He has left Mrs. Gray's