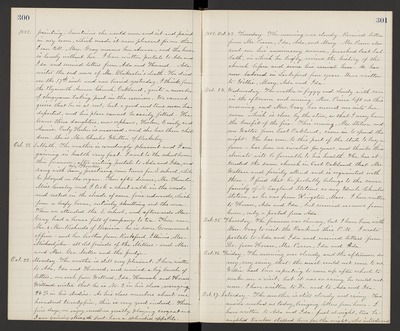 1883. painting. Sometimes she would come and sit and paint in my room, which made it more pleasant for me than I can tell. Mrs. Gray mourns her absence, and the house is lonely without her. I have written postals to Ada and Ida and received letters from Ada and Howard. Ada writes the sad news of Mr. Blakeslee's death. He died on the 17th inst. and was buried yesterday, I think, from the Plymouth Avenue Church, Oakland, quite a number of clergymen taking part in the exercises. We cannot grieve that he is at rest, but a good and true man has departed, and his place cannot be easily filled. He leaves three daughters, now orphans, Helen, Emily and Annie. Only Helen is married, and she has three children. She is Mrs. Charles Whitton of Berkeley.

Oct. 21. Sabbath. The weather is exceedingly pleasant and I am gaining in health very fast. I went to the school house this forenoon, after writing postals to Ada and Ida, and sang with him, Mr. Thornton practising some tunes for S. school, while he played on the organ. Then after dinner, Mr. Thornton, Miss Cearly and I took a short walk in the woods and rested in the shade of some fine redwoods, which from a leafy bower, entirely shutting out the sun. Then we attended the S. school, and afterwards Mrs. Gray had a house full of company to tea. There were Mr. & Mrs. Richards of Benicia - he is some Government officer - and her brother from Rockford, Illinois, Mr. Michaeljohn - all old friends of the Millers - and Mr. and Mrs. Geo. Miller and the Judge.

Oct. 22. Monday. The weather is still very pleasant. I have written to Ada, Ida and Howard, and received a big bunch of letters - one each from Willard, Ida, Hannah and Horace. Willard writes that he is No. 2 in his class, averaging 94% in his studies. As his class numbers about one hundred twentyfive, this is very good indeed. These five days, we enjoy ourselves greatly playing croquet and I am gaining strength fast - have a splendid appetite.

1883. Oct. 23. Tuesday. The morning was cloudy. Received letters from Mr. Pascoe, Ida, Ada, and Mary. Mr. Pascoe also sent me his anniversary sermon, preached last Sabbath, in which he briefly reviews the history of the church before and since his arrival here. He has now labored in Lockeford four years. Have written to Willie, Mary, Ada and Ida.

Oct. 24. Wednesday. The weather is foggy and cloudy with rain in the afternoon and evening. Mrs. Pierce left us this morning and Mrs. Gray has moved me into her room which is close by the stove, so that I may have the benefit of the fire. This evening, Mr. Stetson and son Walter from East Oakland, came in to spend the night. He has come to this part of the State to buy a farm - has been an invalid for years, and thinks this climate will be favorable to his health. He has attended the same church in East Oakland that Mr. Wallace and family attend and is acquainted with them. I find that he probably belongs to the same family of N. England Stetsons as my Uncle Charles Stetson, as he was from Kingston, Mass. I have written to Horace, Ada and Ida, but received no news from home, only a postal from Ada.

Oct. 25. Thursday. The forenoon was showery, but I have been with Mrs. Gray to visit the Rankins this P.M. I wrote postals to Ada and Ida and received letters from Dr. from Horace, Mr. Pascoe, Ida and Ada.

Oct. 26. Friday. The morning was cloudy and the afternoon so very, very rainy that the mail could not come to us. Willie had been expecting to come up after school to make me a visit, but it was so rainy he could not come. I have written to Dr. and to Ada and Ida.

Oct. 27. Saturday. The weather is still cloudy and rainy. Two mails reached us today, bringing letters from home. I have written to Ada and Ida. Just at night, two benighted travelers stopped here for the night, who introduced