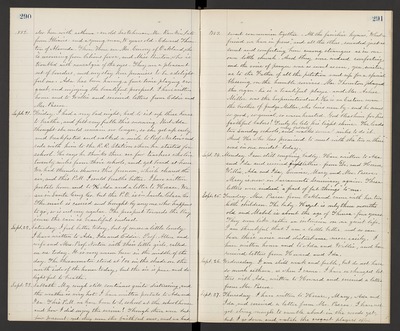 1883. also here with asthma - and old Scotchman, Mr. Rankin, late from Illinois - and a young man, 18 years old - Edward Thornton of Alameda. Then there are Mr. Emory of Oakland, who is recovering from bilious fever, and Miss Benton, who is troubled with neuralgia of the eyes. They are a pleasant set of boarders, and my stay here promises to be a delightful one. Ada has been having a fine time playing croquet, and enjoying the beautiful prospect. I have written home and to Willie and received letters from Eddie and Mr. Pascoe.

Sept. 21. Friday. I had a very bad night, had to sit up three hours to breathe, and felt very feeble this morning. But Ada thought she could remain no longer, so she got up early and breakfasted and walked a mile to Prof. Norton's and rode with him to the R.R. Station when he started for school. He says he thinks there are few teachers who live twenty miles from their schools, and yet board at home. We had thunder showers this forenoon. which cleared the air, and this P.M. I could breathe better. I have written postals home and to Ada and a letter to Horace. We are in Santa Cruz Co. but the P.O. is in Santa Clara Co. The mail is carried and bought by any one who happens to go, so is not very regular. The prospect towards the Bay since the rain is beautiful indeed.

Sept. 22. Saturday. I feel better today, but of course a little lonely. I have written to Ada, Ida and Eddie. Prof. Allen and wife and Mrs. Prof. Norton with their little girls, called on us today. It is very warm here in the middle of the day. The thermometer stood at -100 in the shade on the north side of the house today, but the air is pure and delightful to breathe.

Sept. 23. Sabbath. My cough still continues quite distressing, and the weather is very hot. I have written postals to Ada and Ida. This P.M. we have been to S. school at the school house and how I did enjoy the service! Though there were but few present, yet they were the faithful ones, and we had

1883. sweet communion together. All the familiar hymns, "What a friend we have in Jesus", and all the others, sounded just as sweet and comforting here among strangers as in our own little church. And they were indeed comforting, and the voice of prayer was as sweet as ever, yea, sweeter, as to the Father of all the petition went up for a special blessing on the humble services. Mr. Thornton played the organ, he is a beautiful player, and Mr. Asher Miller was the Superintendent. He is an Eastern man, the brother of Judge Miller, who lives nearby - and he seems so good, so genial, so warm hearted. God bless him for his faithful labor! Truly he lets his light shine. He leads two Sunday schools every Sabbath and walks several miles to do it. And He who has promised to meet with the "two or three" was "in our midst" today.

Sept. 24. Monday. I am still coughing badly. Have written to Ada and Ida and received fight letters from Dr. and Horace, Willie, Ada and Ida, Eunice, Mary and Mr. Pascoe. Mary is now in Sacramento Seminary again. These letters were indeed "a feast of fat things" to me.

Sept. 25. Tuesday. Mrs. Pierce from Oakland came with her two little children. The baby Hagel is only three months old and Mabel is about the age of Theresa - four years. They seem like rather an intrusion on our quite life. I am thankful that I am a little better, and so can bear their noise and disturbance more easily. I have written home and to Ada and Willie, and have received letters from Howard and Ida.

Sept. 26. Wednesday. I am still weak and feeble, but do not have so much asthma, as when I came. I have exchanged letters with Ada, written to Howard and received a letter from Mr. Pascoe.

Sept. 27. Thursday. I have written to Horace, Mary, Ada and Ida, and received a letter from Mr. Pascoe. I have not got strong enough to ramble about in the words yet, but I go down watch the croquet players often.