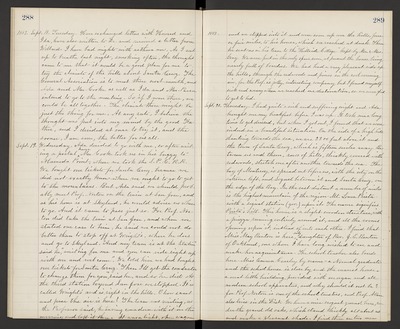 1883. Sept. 18. Tuesday. Have exchanged letters with Howard and Ida, have also written to Dr. and received a letter from Willard. I have bad nights with asthma now. As I sat up to breathe last night, smoking often, the thought came to me that it would be a good plan for me to try the climate of the hills about Santa Cruz. The General Association is to meet there next month, and Ada and Mr. Cooke as well as Ida and Mr. Pascoe intend to go to the meeting. So if I were there, we could be all together. The climate there might be just the thing for me. At any rate, I believe the thought was put into my mind by the good Father, and I decided at once to try it, and the sooner, I am sure, the better for us all.

Sept. 19. Wednesday. Ada decided to go with me, so after writing a postal home, Mr. Cooke took us in his buggy to Alameda Point, where we took the S.P.C.R.R. We bought our tickets for Santa Cruz, because we did not exactly know where we ought to go to get to the mountains. But Ada said we should probably meet Prof. Norton on the train at San Jose, and as his home is at Skyland, he would advise us where to go. And it came to pass just so. For Prof. Norton did take the train at San Jose, and when we stated our case to him, he said we could not do better than to stop off at Wright's, where he does and go to Skyland. "And my team is at the Station" said he, "waiting for me and you can ride right up with me and welcome." We told him we had bought our tickets for Santa Cruz. "Then I'll get the conductor to change them for you", said he, and so he did. At the third station beyond San Jose we stopped. It is called Wright's and is right in the hills. O how sweet and June the air is here! The team was waiting, as the Professor said, he leaving come down with it in the morning and left it there. It was a light, open wagon

1883. and we stepped into it and were soon up over the hills, four or five miles, to his house, which we reached at dusk. Then he sent us in his team to the "Hillside Cottage" kept by Mr. & Mrs. Gray. We were put in the only spare room, at present the house being nearly full of boarders. We had had a very pleasant ride up the hills, through the redwoods and pines in the cool evening air, for the Prof. is jolly, interesting company, but I found myself sick and weary when we reached our destination, so we were glad to get to bed.

Sept. 20. Thursday. I had quite a sick and suffering night and Ada brought me my breakfast before I was up. It took me a long time to get dressed, but when I got out, I found that we were indeed in a beautiful situation. On the side of a high hill slanting towards the sea, we are 2300 feet above it and the town of Santa Cruz, which is fifteen miles away. Between us and them, rows of hills, thickly covered with redwoods, stretch one after another towards the sea. The bay of Monterey, is spread out before us, with the city on the extreme left, and Soquel between it and Santa Cruz, on the edge of the Bay. In the east distant a number of miles is the highest mountain of the region - Mt. Loma Prieta - with a signal station (gov.) upon it. The name signifies Prieta's hill. This house is a slight wooden structure, with a piazza running entirely around it, and all the rooms opening upon it, instead of into each other. I find that Miss May Benton is here, only daughter of Rev. J.E. Benton of Oakland, one whom I have long wished to see and make her acquaintance. The school teacher also boards here - Miss Emma Cearley by name - a Normal graduate and the school house is close by and the nearest house - a neat little building provided with an organ and all modern school apparatus, and why should it not be? for Prof. Norton is one of the school trustees, and Prof. Allen also lives in the Dist. We have a nice croquet ground here, under the ground old oaks, which stand thickly all about us and make a pleasant shade. I find there are two men