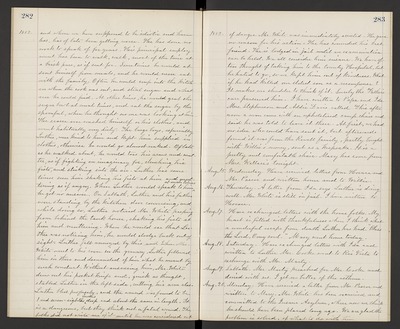 1883. and whom we have supposed to be idiotic and harmless, has of late been getting worse. He has done no work to speak of for years. His principal employment has been to walk, walk, most of the time at a brisk pace, as if sent for. Sometimes he would absent himself from meals, and he would never eat with the family. Often he would creep into the kitchen when the cook was out, and steal sugar and whatever he could find. At other times, he would grab the sugar bowl at meal times, and eat the sugar by the spoonful, when he thought no one was looking at him. He scarce ever washed himself or his clothes, and went habitually very dirty. The large boys, especially Luther, were kind to him and kept him supplied in clothes, otherwise he would go almost naked. Of late as he walked about, he would toss his arms and mutter, as if fighting an imaginary foe, clenching his fists, and striking into the air. Luther has sometimes seen him shaking his fists at him and muttering as if angry. When Luther would speak to him at such times he got no answer. On Sabbath, Luther and his father were standing by the kitchen door conversing, and while doing so, Luther noticed Mr. White peeping from behind the tank house, shaking his fists at him and muttering. When he would see that Luther was noticing him, he would dodge back out of sight. Luther felt annoyed by this, and when Mr. White went to his room in the granary, Luther followed him in there and demanded of him what he meant by such conduct. Without answering him, Mr. White drew out his pocket knife and, quick as thought, stabbed Luther in the left side, cutting his arm also. Luther bled profusely, and the wound was found to be 1 and seven-eights inches deep and about the same in length. It is a dangerous, but they think not a fatal wound. The folks did not write me of it until he was considered out

1883. of danger Mr. White was immediately arrested. He gave no reason for his action. He has wounded his best friend. He is lodged in jail until an examination can be held. We all consider him insane. We have often thought of taking him to the County Hospital, but he hated to go, so we kept him out of kindness. What if he had killed our eldest son as a recompense? It makes me shudder to think of it. Surely the Father's can preserved him. I have written to Papa and Ida. Mrs. Stephenson and Addie Davis called this afternoon a man came with an upholstered camp chair and said he was told to leave it there. At first, we had no idea who could have sent it, but afterwards found it was from the Rowell family, partly bought with Willie's money, sent as a keepsake. It is a pretty and comfortable chair. Mary has come from Mrs. Wallace's tonight.

Aug. 15. Wednesday. Have received letters from Horace and Mr. Pascoe and written home and to Willie.

Aug. 16. Thursday. A letter from Ida says Luther is doing well. Mr. White is still in jail. I have written to Horace.

Aug. 17. Have exchanged letters with the home folks. My heart is filled with thankfulness when I think what a wonderful escape from death Luther has had. "Bless the Lord, O my soul." Mary went home today.

Aug. 18. Saturday. Have exchanged letters with Ida and written to Luther Mr. Cooke went to Rio Vista to exchange with Mr. Marty.

Aug. 19. Sabbath. Mr. Marty preached for Mr. Cooke and dined with us. I get no better of the asthma.

Aug. 20. Monday. Have received a letter from Mr. Pascoe and written to Mary. Mr. White has been examined and committed to the Insane Asylum, where now we think he should have been placed long ago. We are glad the problem is solved, of what to do with him.