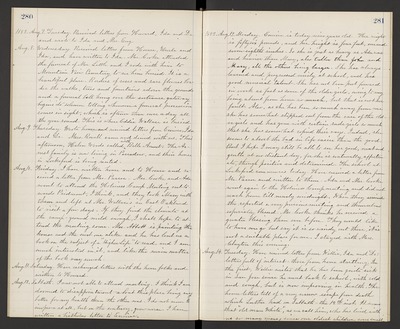 Aug. 8. Wednesday. Received letters from Horace, Uncle and Ida, and have written to Ida. Mr. Cooke attended the funeral of Mr. Little and I rode with him to Mountain View Cemetery to see him buried. It is a beautiful place. Borders of roses and rare flowers border the walks, trees and fountains adorn the grounds and a funeral bell hung over the entrance gateway begins its solemn tolling whenever a funeral procession comes in sight, which is oftener than once a day all the year round. This is where Eddie Wallace is buried.

Aug. 9 Thursday. Wrote home and received letters from Eunice, Ida and Dr. Mrs. Rowell came and dined with us. This afternoon, Helen Woods called with Belle Arnest, The Arnest family is now living in Pescadero, and thin house in Lockeford is being rented.

Aug. 10. Friday. I have written home and to Horace and received a letter from Mr. Pascoe. Mr. Cooke and Ada went to attend the Holiness Camp Meeting out towards Pridmont, I think, and they took Mary with them and left at Mr. Wallace's in East Oakland to visit a few days. If they find the climate at the camp - ground mild enough, I shall hope to attend the meeting some. Mr. Abbott is painting the house and the next one alike and he has lent us a book on the subject of a "Higher Life" to read, and I am much interested in it, and like the main matter of the book very much.

Aug. 11. Saturday. Have exchanged letters with the home folks and written to Howard.

Aug. 12. Sabbath. I was not able to attend meeting. I think I am doomed to disapppointment about this place being any better for my health than the other was. I do not seem to improve at all, but on the contrary, grow worse. I have written a birthday letter to Eunice.

1883. Aug. 13. Monday. Eunice is today nine years old. Her weight is fiftysix pounds, and her height is four feet, one and seven-eighths inches. So she is just as heavy as Ada was and heavier than Mary, also taller than John and Mary, all the others being larger. She has always learned and progressed nicely at school, and has good musical talent. She has not been put forward in work as fast as some of the older girls, owing to my being absent from home so much, but that is not her fault. Also, as she has been so much away from me she has somewhat slipped out from the care of the older girls and has gone with certain rude girls so much that she has somewhat copied their ways. Indeed, she seems to absorb the bad in life easier than the good. But I hope I may still be able to see her good, neat and gentle at no distant day, for she is naturally affectionate, though positive and determined. The school at Lockeford commences today. Have received a letter from Mr. Pascoe and written to them. Ada and Mr. Cooke went again to the Holiness Camp meeting and did not reach home till nearly midnight. When they arrived the reported a very precious meeting and themselves especially blessed. Mr. Cooke thinks he received a greater blessing that ever before. They would like to have me go but say it is so windy out there, it is not a suitable place for me. I stayed with Mrs. Clayton this evening.

Aug. 14. Tuesday. Have received letters from Willie, Ida and Dr. - letters full of interest those from home startling. In the first, Willie writes that he has been quite sick in San Jose since he went back to school, with cold and cough, but is now improving in health. The home letters tell of a very narrow escape from death which Luther had on Sabbath - the 12th inst. It seems that "old man White", as we call him, who has lived with us so many years, since our oldest children were small