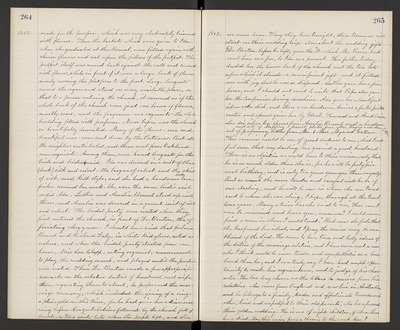 1883. made for the purpose, which was very elaborately trimmed with flowers. Then the baskets which were given to Ida when she graduated at the Normal, were filled again with choice flowers and sat upon the pillars of the pulpit. The pulpit itself was moved back against the wall and covered with flowers, while in front of it was a large bank of flowers nearly covering the platform to the front. Large bouquets covered the organ and stood on every available place, so that to a person entering the church, it seemed as if the whole back of the church were just one bower of flowers, mostly roses, and the fragrance was exquisite - the whole building filled with perfume. Never before was the church so beautifully decorated. Many of the flowers - rare and beautiful ones - were sent down by the Putnams. But all the neighbors contributed, and those sent from Oakland, were exquisite. Among them, were hand bouquets for the bride and bridesmaid. Ida was dressed in a suit of blue (dark) silk and velvet - the basque of velvet and the skirt of silk, made kill style, and she had a handsome silk lace ficher around her neck. She wore the same bride's veil as did Ada. Luther and Amelia Bruml stood up with them, and Amelia was dressed in a garnet suit of silk and velvet. The bridal party were seated when they first entered the church, in front of Dr. Benton, the officiating clergyman. I should have said that Julius Bruml and Richard Daly, in white kid gloves, acted as ushers, and when the bridal party started from our house, Miss Lou Clapp, acting organist, commenced to play the wedding march, and played until the parties were seated. Then Dr. Benton made a few appropriate remarks on the relative duties of husband and wife, then, requesting them to stand, he performed the marriage ceremony, which included the giving of a ring - a plain gold one this time, for he had given her a diamond ring before Congratulations followed by the church full of people, so twas quite late when the people left, and then

1883. we came home. They stay here tonight, then tomorrow will start on their wedding trip. Now about the wedding gifts, Dr. Benton, before he left, gave the $10. which Mr. Pascoe had sent him as a fee, to Ida as a present. Her father today deeded her the house back of the church and the two lots upon which it stands - a munificent gift and it filled me with joy that he was so disposed. Luther gave her a fine horse, and I should not omit to write that Papa also gave her the Comparison Sewing machine. Ada gave her a beautiful silver cake-dish, and there were handsome knives & forks, pickle castor and spoons given her by Uncle, Howard and Aunt Susie, also six silver tea-spoons from Amelia Bruml and a handsome and sets of Majolica dessert plates from Mrs. Rogers and Mrs. Cotton. set of perfumery bottles from Mr. & Mrs. Mynard Wallace. This occasion would be one of great sadness to me, did I not feel sure that my darling has gained a good husband. There is no objection we could have to their union, only that he is so much older than she is, for he will be fortyfive next birthday, and is only two years younger than myself. But so much the more tender and careful will he be of our darling, and he will be one in whom she can trust and to whom she can cling, I hope, through all the troublous years. Many a time has she said to me, "How can I ever be married and leave you, mamma? I could never find a man in whom I could trust." But now she feels that she has found her ideal, and I pray the union may be one blessed of the Lord. He seems to have true and holy ideas of the duties of the marriage relation, and I have never met a man who I think would be more tender and sympathetic as a husband than he, and I can truly say I have had ample opportunity to make his acquaintance, and to judge of his character. He has long shown us the letters he receives from his relatives, who came from England and now live in Australia, and he belongs to a family, tender and affectionate towards each other, kind and respectful to their old parents, who have passed their golden wedding. He is one of eight children, of whom three have died. May this union prove a blessing to the work here!