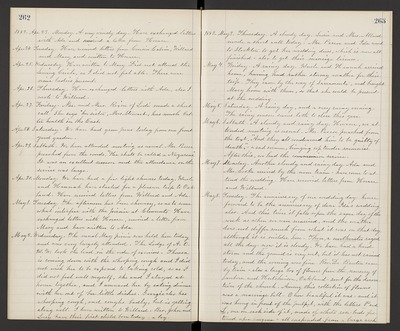 1883. Apr. 23. Monday. A very windy day. Have exchanged letters with Ada and received a letter from Horace.

Apr. 24. Tuesday. Have received letters from Cousin Calvin, Willard and Mary and written to Horace.

Apr. 25. Wednesday. Have written to Mary. Did not attend the Sewing Circle, as I did not feel able. There were nine ladies present.

Apr. 26. Thursday. Have exchanged letters with Ada, also I wrote to Willard.

Apr. 27. Friday. Mr. and Mrs. Rex'on of Lodi made a short call. She says her sister, Mrs. Stewart, has much better health in the East.

Apr. 28. Saturday. We have had green peas today from our front yard garden.

Apr. 29. Sabbath. We have attended meeting as usual. Mr. Pascoe preached from the words, "He shall be called a Nazarene." It was an excellent sermon and the attendance on the service was large.

Apr. 30. Monday. We have had a few lights showers today. Uncle and Hannah have started for a pleasure trip to Oakland. Have received letters from Willard and Ada.

May 1. Tuesday. The afternoon has been showery, so as to some what interfere with the picnic at Clements Have exchanged letters with Horace, received a letter from Mary and have written to Ada.

May 2. Wednesday. The usual May picnic was held here today and was very largely attended. The Lodge of A. O. W. W. took the lead in the order of exercises. Theresa is coming down with the whooping cough and I did not wish her to be exposed to taking cold, so as I did not feel well myself, she and I stayed at home together, and I amused her by eating dinner with her out of her little dishes. Georgie also has whooping cough, and coughs badly, but is getting along well. I have written to Willard. Bro. John and Lucy have their first child born today - a boy -

1883. May 3. Thursday. A cloudy day. Susie and Mrs. Allard made a short call today. Mr. Pascoe and Ida went to Stockton to get her wedding dress, which is now all finished - also to get their marriage license.

May 4. Friday. A rainy day. Uncle and Hannah arrived home, having had rather stormy weather for their trip. They came by the way of Sacramento, and brought Mary home with them, so that she could be present at the wedding.

May 5. Saturday. A rainy day, and a very rainy evening. The rainy season seems loth to close this year.

May 6. Sabbath. A cloudy and rainy day. However, we attended meetng as usual. Mr. Pascoe preached from the text, "And they all condemned him to be guilty of death", a sad sermon, bringing up tender memories. After this, we had the communion service.

May 7. Monday. Another cloudy and rainy day. Ada and Mr. Cooke arrived by the noon train - have come to attend the wedding. Have received letters from Horace and Willard.

May 8. Tuesday. The anniversary of our wedding day - hence forward to be the anniversary of dear Ida's wedding also. And this time it falls upon the same day of the week as when we were married, and the weather does not differ much from what it was on that day, although it is milder here. Then, a northeaster raged all the day - now it is cloudy. We have had a hard storm and the ground is very wet, but it has not rained today, and the evening was fine. Rev. Dr. Benton came by train - also a large box of flowers from the nursery of Sanborn and Hutchinson, Oakland - sent for the decoration of the church. Among this collection of flowers was a marriage bell - O how beautiful it was - and it was hung in front of the pulpit, with the letters P and L, one on each side of it, made of white rose-buds fastened upon evergreen - all suspended from a large arch