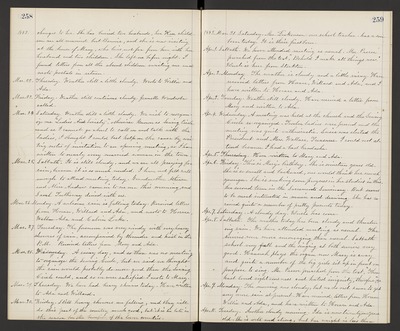 1883. changes to her. She has buried two husbands, her Ten children are all married but Bennie, and she is now visiting at the house of Mary, who lives not far from him with her husband and two children. She left us before night. I found letters from all the absent children awaiting me and wrote postals in return.

Mar. 24. Saturday. Weather still a little cloudy. We wish reorganize our "Ladies Aid Society", otherwise known as Sewing Circle, and as I cannot go about to call on and talk with the ladies, I thought I could best help on the cause by writing notes of invitation to an opening meeting, so I have written to nearly every married woman in the town.

Mar. 25. Sabbath. It is still cloudy, and we are all praying for rain, because it is so much needed. I have not felt well enough to attend meeting today. Grandmother Athearn and Alice Andrew came in to see me this morning, and Saml. Tretheway dined with us.

Mar. 26. Monday. A welcome rain is falling today. Received letters from Horace, Willard and Ada, and wrote to Horace, Ada and Calvin Locke.

Mar. 27. Tuesday. The forenoon was very windy with very heavy showers of rain, accompanied by thunder and hail in the P.M. Received letters from Mary and Ada.

Mar. 28. Wednesday. A rainy day, and so there was no meeting to organize the Sewing Circle, but we said we thought the rain would probably do more good than the Sewing Circle could, and so we were satisfied. I wrote to Mary.

Mar. 29. Thursday. We have had heavy showers today. Have written to Ada and Willard.

Mar. 30. Friday. Still heavy showers are falling, and they will do this part of the country much good, but it is too late in the season for the benefit of the lower counties.

Apr. 1. Sabbath. We have attended meeting as usual. Mr. Pascoe preached from the text, "Behold I make all things new." Uncle is here from Stockton.

Apr. 2. Monday. The weather is cloudy and a little rainy. Have received letters from Horace, Willard and Ada, and I have written to Horace and Ada.

Apr. 3. Tuesday. Weather still cloudy. Have received a letter from Mary and written to Ada.

Apr. 4. Wednesday. A meeting was held at the church and the Sewing Circle re - organized. Twelve ladies were present and the meeting was quite enthusiastic. Susie was elected the President and Mrs. Wallace, Treasurer. I could not attend because I had a bad headache.

Apr. 5. Thursday. Have written to Mary and Ada.

Apr. 6. Friday. This is Mary's birthday. She is nineteen years old. She is so small and backward, one would think her much younger, She is making some progress in her studies in this, her second term in the Sacramento Seminary. But seems to be most interested in music and drawing. She has received quite a number of pretty presents today.

Apr. 8. Sabbath. The weather today has been cloudy and threatening rain. We have attended meeting as usual. The services were more encouraging than usual. Sabbath School very full and the singing at both services very good. Hannah plays the organ now Mary is away and quite a number of the big girls sit up in front on purpose to sing. Mr. Pascoe preached from the text, "Thou hast loved righteousness and hated iniquity, therefore," x.c.

Apr. 9. Monday. The morning was cloudy, but we do not seem to get any more rain at present. Have received letters from Horace Willie and Ada, and have written to Horace and Ada.

Apr. 10. Tuesday. Another cloudy morning. Ida is now twentyone years old. She is well and strong, but her weight is less than