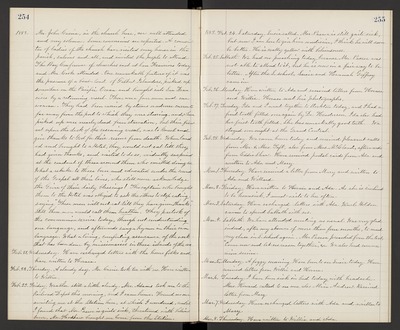 1883. Mr. John Currie, in the church here, are well attended and very solemn. Some conversions are reported. A committee of ladies of the church have visited every house in the parish, saloons and all, and invited the people to attend. The Bay Conference of churches met at San Francisco today and Mr. Cooke attended. One remarkable feature of it was the presence of a boat load of Gilbert Islanders, picked up somewhere on the Pacific Ocean and brought into San Francisco by a returning vessel. There were four men and one woman. They had been carried by storms oradverse currents far away from the port to which they were steering, and, when picked up were nearly dead from starvation, but their first act upon the deck of the rescuing vessel, was to kneel and give thanks to God for their rescue from death. When landed and brought to a Hotel, they would not eat till they had given thanks, and waited to do so, evidently surprised at the conduct of those around them who omitted doing so. What a rebuke to those born and educated under the sound of the Gospel all their lives, who still never acknowledge the Giver of their daily blessings! The captain who brought them to the Hotel was obliged to ask the others to stop eating, saying, "These men will not eat till they have given thanks." Still those men would call them heathen. They partook of the communion service today, though not understanding our language, and afterwards sang a hymn in their own language. What a living, comforting assurance of the work. that has been done by missionaries in those islands of the sea.

Feb. 21. Wednesday. Have exchanged letters with the home folks and have written to Horace.

Feb. 22. Thursday. A cloudy day. Mr. Currie took tea with us. Have written to Willie.

Feb. 23. Friday. Weather still a little cloudy. Mr. Adams took me to the Railroad Depot this morning, and I came home. Found no one awaiting me at the Station here, at which I wondered, until I found that Mr. Pascoe is quite sick, threatened with bilious fever. Mr. Hershaw brought me home from the Station.

1883. Feb. 24. Saturday. Susie called. Mr. Pascoe is still quite sick, but now I am here to give him medicine, I think he will soon be better. He is really yellow with biliousness.

Feb. 25. Sabbath. We had no preaching today, because Mr. Pascoe was not able to attend to it, but he is now in a fair way to be better. After the S. school, Susie and Hannah Geffroy came in.

Feb. 26. Monday. Have written to Ada and received letters from Horace and Willie. Horace sent his photographs.

Feb. 27. Tuesday. Ida and I went together to Stockton today, and I had a front tooth filled over again by Dr. Henderson. Ida also had her first tooth filled. She has remarkably good teeth. We stayed over night at the Grand Central.

Mar. 1. Thursday. Have received a letter from Mary and written to Ada and Willard.

Mar. 2. Friday. Have written to Horace and Ada. As she is inclined to be homesick, I must write to her often.

Mar. 3. Saturday. Have exchanged letters with Ada. Uncle Holden came to spend Sabbath with us.

Mar. 4. Sabbath. We have attended meeting as usual. Was very glad indeed, after any absence of more than four months, to meet my class in S. school again. Mr. Pascoe preached from the text, "Come now and let us reason together," x.c. We also had communion service.

Mar. 5. Monday. A foggy morning. Have been to see Susie today. Have received letters from Willie and Horace.

Mar. 6. Tuesday. I have been sick bed today with headache. Mrs. Howard called to see me also Alice Andrew. Received letter from Mary.

Mar. 7. Wednesday. Have exchanged letters with Ada and written to Mary.

Mar. 8. Thursday. Have written to Willie and Ada.