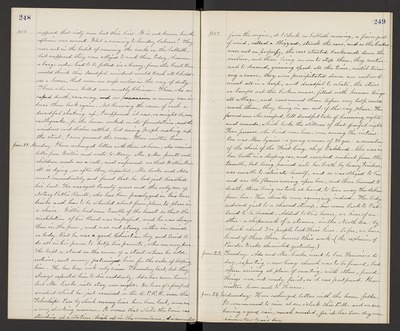 1883. supposed that sixty men lost their lives. It is not known how the explosion was caused. What a warning to Sunday laborers! They were not in the habit of running the works on the Sabbath, but supposed they were obliged to work them today, because a large order had to be filled in a hurry, from the East. One would think this dreadful accident would teach all beholders a lesson, that none are safe unless in the way of duty. Those who were killed were mostly Chinese. Those who escaped death, ran away, and no persuasion or money can induce them back again. Not knowing the cause of such a dreadful shaking up, I supposed it was, or might be, an earthquake, for the house rocked on its foundation, and the windows and dishes rattled, but seeing people rushing up the street, I soon guessed the cause. Have written home.

Jan. 22. Monday. I have exchanged letters with those at home, also received letter from Willie and wrote to Mary. Mr. & Mrs. Jewett and children made us a call, and informed us that Willie Rowell is dying, so after they departed, Mr. Cooke and Ada went immediately and found that he had just breathed his last. He was aged twenty years and the only son of Notary Public Rowell, who has been paralyzed in his lower limbs and has to be wheeled about from place to place in a chair. Willie had some trouble of the heart so that the circulation of his blood was imperfect, and he was always blue in the face, and was not strong either in mind or body. But he was a good Christian boy and tried to do all in his power to help his parents, who are very poor. He kept a stand on the corner of a street where he sold notions, and many patronized him for the sake of helping him. He has been sick only since Thursday last, but they always expected him to die suddenly. Ada has come home but Mr. Cooke will stay over tonight. We hear of a fearful accident which has just occurred on the C.P.R.R. near the Tehachipe Pass by which many lives have been lost, some in a very shocking manner. It seems that while the train was standing at a station, high up in the mountains, disconnected

1883. from the engine, at 1 o'clock on Sabbath morning, a fierce gust of wind, called a blizzard, struck the cars, and as the brakes were not on properly, the cars started backward down the incline, and there being no one to stop them, they continued to descend, gaining speed all the time, until turning a curve, they were precipitated down an embankment all in a heap, and dreadful to relate, the stoves or lamps set the broken mass, filled with human beings all a blaze, and consumed them before any help could reach them, they being in an out-of-the-way place. The favored ones who escaped, tell dreadful tales of harrowing sights and sounds, which broke the stillness of that fearful night. Four persons, who lived near here, were among the victims. One was Mrs. Squires - a young woman of 26 yrs. - a member of the choir of the First Cong. ch. of Oakland. She was in her birth in a sleeping car, and escaped unhurt from the tumble, but being pinned into her birth by heavy timbers, was unable to extricate herself, and so was obliged to lie and see the flames coming upon her, and there burned to death, there being no tools at hand, to tear away the debris from her. Her shrieks were agonizing indeed. Her body, reduced just to a chaired stump, has come back to Oakland to be buried. Added to this honor, we hear of another - a shipwreck of a steamer in the North Sea - by which about 300 people lost their lives. So far, we have heard of these three honors this week. (the explosions of Powder Works chronicled yesterday.)

Jan. 23. Tuesday. Ada and Mr. Cooke went to San Francisco today, expecting a new Cong. church was to be formed, but upon arriving at place of meeting, with others, found things were not ready for it, so it was post-poned. I have written home and to Horace.

Jan. 24. Wednesday. Have exchanged letters with the home folks. It commenced to rain at one o'clock this P.M. and we are having a good rain, much needed, for it has been dry ever since New Year's day.