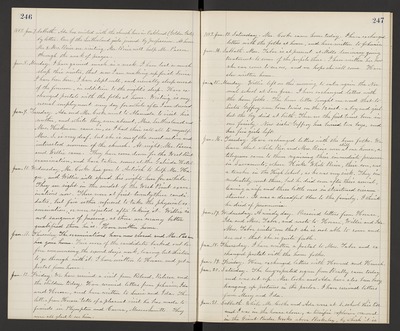 1883. Jan. 7. Sabbath. Ada has united with the chuch here in Oakland (Golden Gate) by letter. One of the Sutherland girls joined by profession. At home Mr. & Mrs. Brier are visiting. Mr. Brier will help Mr. Pascoe through the week of prayer.

Jan. 8. Monday. I have gained much in a week. I have lost so much sleep this winter, that now I am making up for it. Since I have been here, I have slept well, and usually sleep most of the forenoon, in addition to the night's sleep. Have exchanged postals with the folks at home. Writing is my usual employment every day for awhile after I am dressed.

Jan. 9. Tuesday. Ada and Mr. Cooke went to Alameda to visit his mother, and while they were absent, Mrs. Sutherland and Mrs. Hickman came in, so I had their call all to myself. Mrs. S. is very deaf, but she is one of the most active and interested women of the church. At night, Mr. Pascoe and Willie came. They have come down for the West Point examination, and have taken rooms at the Galinda Hotel.

Jan. 10. Wednesday. Mr. Cooke has gone to Antioch to help Mr. Hager, and Willie will spend his nights here for awhile. They are right in the midst of the West Point examinations now. There were at first twentythree candidates, but five either refused to take the physical examination, or were rejected after taking it. Willie is not sanguine of passing, as there are many better qualified than he is. Have written home.

Jan. 11. Thursday. The examinations have now closed and Mr. Pascoe has gone home. Five more of the candidates backed out before commencing the second days work, leaving but thirteen to go through with it. I have written to Horace and got a postal from home.

Jan. 12. Friday. We have received a visit from Roland, Rebecca and the children today. Have received letters from Johnnie, Ida and Horace, and have written to Susie and Ida. The letter from Horace tells of a pleasant visit he has made to friends in Plympton and Carver, Massachusetts. They were all glad to see him.

1883. Jan. 13. Saturday. Mr. Cooke came home today. I have exchanged letters with the folks at home, and have written to Johnnie.

Jan. 14. Sabbath. Mrs. Tabor is at present at Mills Seminary giving treatment to some of the pupils there. I have written her how she can come to see us, and we hope she will come. Have also written home.

Jan. 15. Monday. Willie left us this morning to enter again the Normal school at San Jose. I have exchanged letters with the home folks. The home letter brought me word that to Sister Geffroy were born twins on the 12 inst. - a boy and girl but the boy died at birth. These are the first twins born in our family. Now sister Geffroy has buried two boys, and has five girls left.

Jan. 16. Tuesday. Have exchanged letters with the home folks. We learn that while Rev. and Mrs. Brier were still at our house, a telegram came to them requiring their immediate presence in Sacramento, where Kirke White Brier, their son, was a teacher in the High School, as he was very sick. They immediately went there, but he died soon after their arrival, leaving a wife and three little ones in straitened circumstances. It was a dreadful blow to the family. I think he died of pneumonia.

Jan. 17. Wednesday. A windy day. Received letters from Horace, Ida and Mrs. Tabor, and wrote to Horace, Willie and Ida. Mrs. Tabor writes me that she is not able to come and see us - that she is quite feeble.

Jan. 18. Thursday. I have written a postal to Mrs. Tabor and exchanged postals with the home folks.

Jan. 19. Friday. Have exchanged letters with Howard and Hannah.

Jan. 20. Saturday. The long-expected organ from Beatty came today and was set up. Mr. Cooke and Ada have also been busy hanging up pictures in the parlor. I have received letters from Mary and Ida.

Jan. 21. Sabbath. While Mr. Cooke and Ada were at S. school this P.M. and I was in the house alone, a terrific explosion occurred in the Giant Powder Works above Berkeley, by which it is