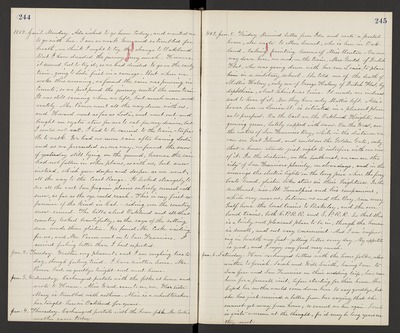 1883. Jan. 1. Monday. Ada wished to go home today, and wanted me to go with her. I am so weak here and so troubled for breath, we think I ought to try the change to Oakland. But I have dreaded the journey very much. However, it seemed best to try it, so we had decided to go on the early train, going to Lodi first in a carriage. But when we woke this morning, we found the rain was pouring in torrents, so we postponed the journey until the noon train. It was still raining when we left, but much more moderately. Mr. Pascoe went all the way down with us, and Howard went as far as Lodi, and went out and bought an oyster stew for me to eat for my dinner, but I could not eat. I had to be carried to the train - too feeble to walk. We had no more rain after leaving Lodi and as we proceeded on our way, we found the snow of yesterday still lying on the ground, because the rain had not fallen in other places, as with us, but snow instead, which grew deeper and deeper as we went, all the way to the Coast Range. It looked strangely to see all the vast San Joaquin plains entirely covered with snow, as far as the eye could reach. This is my first experience of the kind in Cal. - riding over the country snow-covered. The hills about Oakland and all that country looked beautifully, as the rays of the setting sun made them glisten. We found Mr. Cooke waiting for us, and Mr. Pascoe went on to San Francisco. I arrived feeling better than I had expected.

Jan. 3. Wednesday. Exchanged postals with the folks at home and wrote to Horace. Alice Ward came to see us. Her Sister Mary is troubled with asthma. Alice is a school teacher has taught here in Oakland for years.

1883. Jan. 5. Friday. Received letter from Ida and wrote a postal home, also wrote to Mrs. Smart, who is here in Oakland, taking painting lessons of Miss Benton. On our way down here, we met, on the train, Mrs. Gould of Dutch Flat, who was going down with her son Louis, to place him in a military school. She told me of the death of Mellie Halsey, only son of George Halsey of Dutch Flat, by diphtheria, about Christmas time. It made me indeed sad to hear of it. Now they have only Mattie left. Ada's house here on Louisa St. is situated in a pleasant place as to prospect. On the East are the Oakland Heights, now growing green, lately capped with snow. On the West, are the waters of San Francisco Bay, while in the distance we can see Goat Island, and could see the Golden Gate, only that a house stands just right to interface with our view of it. In the distance, on the Southwest, we can see the city of San Francisco plainly, on clear days, and in the evenings the electric lights on the long pier where the ferryboats land, glisten like stars in their brightness. In the northwest, rise Mt. Yamalpais and his companious, while very near us, between us and the Bay, run every half hour the local trains to Berkeley, and the overland trains, both C.P.R.R. and S.P.R.R. So that this is a lively and pleasant place to be in, though the house is small, and not very convenient. And I am improving in health very fast - getting better every day. My appetite is good, and I enjoy my food very much.

Jan. 6. Saturday. Have exchanged letters with the home folks, also written to Josiah. Sarah and Will Smith, having been to San Jose and San Francisco on their wedding trip, have come here for a farewell visit, before starting for their home. She hoped her mother would come down here to say goodbye, but she has just received a letter from her saying that she cannot get away from home, so cannot see her again. Sarah is quite overcome at the thought, for it may be long years era they meet.