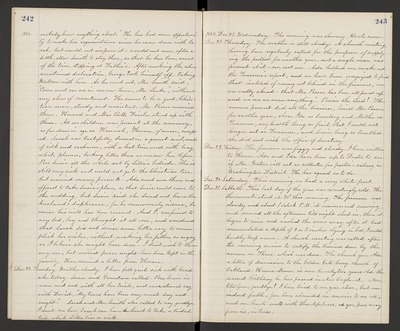 1882. no body knew anything about. "He has had some opportunity to make his acquaintance since he came down with Sarah, but would not improve it - would not even, after a little, allow Smith to stay there, so that he has been, most of the time, stopping at Father's. After making the above mentioned declaration, George took himself off, taking Wallace with him. As he went out, Mr. Smith said, "Come and see us in our new home, Mr. Locke," without any show of resentment. He seems to be a good, Christian man, steady and consistent. Mr. Pascoe married them. Howard and Miss Belle Fairlee stood up with them. All our children were present at the ceremony, as far down in age as Hannah, Horace, of course, excepted. Sarah was tastefully dressed in a garnet suit, made of silk and cashmere, with a hat trimmed with long white plumes, looking better than we ever saw her before. Poor Susie all the while sat by Lilla's bedside. She is still very sick and could not go to the Christmas tree, but received many presents. Ada went over there and offered to take Susie's place, so that Susie could come to the wedding, but Susie said she dared not brave her husband's displeasure, for he seems nearly insane, because his will has been crossed. And I, confined to my bed, lay and thought it all over, and wondered that Sarah did not device some better way to accomplish her wishes, without making her father so angry as I believe she might have done. I don't wish to blame any one, but wished peace might have been kept in the family. Have received a letter from Horace.

Dec. 26. Tuesday. Weather cloudy. I have felt quite sick with headache today. Susie and Grandma called. Poor Susie is worn and sad with all her trials, and can almost say with David, "My tears have been my meal day and night." Sarah and Mr. Smith also called to say goodbye. I don't see how Sarah can have the heart to take a bridal trip, while Lilla lies so sick.

Dec. 28. Thursday. The weather is still cloudy. A church meeting having been regularly called for the purpose of supplying the pulpit for another year, not a single man was present at it - no, not one. Ada helped me make out the Treasurer's report, and we have been overjoyed to find that instead of coming out behind in the finances, we are really ahead - that Mr. Pascoe has been all paid up and we "owe no man anything." Praise the Lord! The women present did all the business, hired Mr. Pascoe for another year, chose Ida as Secretary and Mother as Treasurer, my health being so frail that I could not longer act as Treasurer, and Susie being so troubled she did not wish the office of Secretary.

Dec. 29. Friday. The forenoon was foggy and cloudy. I have written to Horace. Ada and Ida have been up to Dexter to see if Mr. Waters will act as collector for pastor's salary in Washington District. He has agreed so to do.

Dec. 30. Saturday. This morning we had a very white frost.

Dec. 31. Sabbath. This last day of the year was exceedingly cold. The thermometer stood at 20- this morning. The forenoon was cloudy and about 1 o'clock P.M. it commenced snowing and snowed all the afternoon till night shut in, then it began to rain and washed the snow away after it had accumulated a depth of 2 or 3 inches. Lying in bed, I could hardly keep warm. A church meeting was called after the morning service to ratify the business done by the women on Thurs. which was done. The church gave Ada a letter of dismission to the Golden Gate Cong. church of Oakland. Horace Mann is now twenty two years old - the second birthday he has passed in New England. Now, Old year, goodbye! I have lived to see your close, but am indeed feeble. You have abounded in mercies to us all, and our hearts swell with thankfulness, as you pass away from us, in tears.