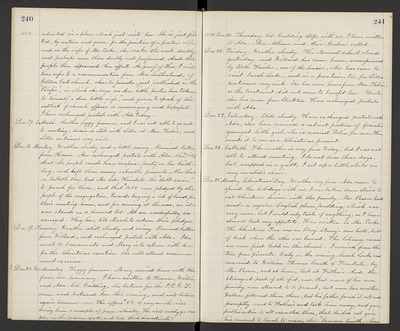 1882. situated in a place which just suits her. She is just fitted, by nature and grace, for the position of a pastor's wife, and, as the wife of Mr. Cooke, she makes the work doubly and perhaps more than doubly well performed. And the people there appreciate her efforts. As proof of this, I will here refer to a communication from Mrs. Sutherland, of Golden Gate church, where he presides, just published in the "Pacific", in which she says "our dear little pastor has taken to himself a dear little wife", and goes on to speak of the outlook of church affairs as encouraging and hopeful. I have exchanged postals with Ada today.

Dec. 17. Sabbath. Another foggy forenoon, and I was not able to go out to meeting. Susie is still with Lilla at Mrs. Tabor's, and Lilla continues very sick.

Dec. 18. Monday. Weather cloudy and a little rainy. Received letter from Horace. Also exchanged postals with Ada. She writes that the people made her a surprise party on her birthday, and left them many valuable presents. Also that on Sabbath, they had Mr. Edw. Kimball the "debt raiser" to preach for them, and that $1050. were pledged by the people of the congregation, towards buying a lot of land for their meeting-house, and for moving it thereon, as it now stands on a borrowed lot. All are wonderfully encouraged. They have till March to redeem their pledges.

Dec. 19. Tuesday. Weather still cloudy and rainy. Received letter from Willard, and exchanged postals with Ada. Ida went to Sacramento and Mary is to return with her for the Christmas vacation. She will attend commencement exercises.

Dec. 20. Wednesday. Foggy forenoon. Mary arrived home with Ida from Sac. Seminary. I have written to Horace, Willie and Ada. Col. Goulding, who lectures for the I.O.G.T. came and lectured here this evening, and will lecture again tomorrow eve. He offers $50. to any one who will bring him a sample of pure whisky. He will analyze samples in the presence of all, and tell their ingredients.

1882. Dec. 21. Thursday. Col. Goulding stops with us. I have written to Ada. Mrs. Athearn and Alice Andrew called.

Dec. 22. Friday. Weather cloudy. The Normal School closed yesterday and Willard has come home, accompanied by Belle Fairlee, one of the Seniors, who has come to visit Sarah Locke, and in a poor time, too, for Lilla continues very sick. She has come home from Mrs. Tabor's, as the treatment did not seem to benefit her. Uncle also has come from Stockton. Have exchanged postals with Ada.

Dec. 23. Saturday. Still cloudy. Have exchanged postals with Ada, also have received a cabinet picture of Josiah's youngest little girl, who is named Delia for me. He sends it to me as a Christmas present.

Dec. 24. Sabbath. The weather is very fine today, but I was not able to attend meeting. I do not dress these days, but, wrapped in a quilt, I sit up a little while in my invalid's chair.

Dec. 25. Monday. Christmas Day. Weather very fine. Ada came to spend the holidays with us. I was taken down stairs to eat Christmas dinner with the family. Mr. Pascoe had made a regular English plum pudding, which was very nice, but I could only taste of anything, as I have almost lost my appetite. Have written to Mr. Cooke. The Christmas Tree was in Benj. Stacey's new hall, built of brick where the other was burned. The literary exercises were first held in the church. I received from the tree four presents. Early in the evening, Sarah Locke was married to William Thomas Smith of Ferndale, by Mr. Pascoe, not at home, but at Father's. And the strangest part of all of it, was, that none of her own family were allowed to be present, not even her mother. Wallace followed them there, but his father found it out, and promptly went to Father's and took him away, and gave public notice to all assembled there, that he did not give his consent to Sarah to marry that "bummer Smith, whom