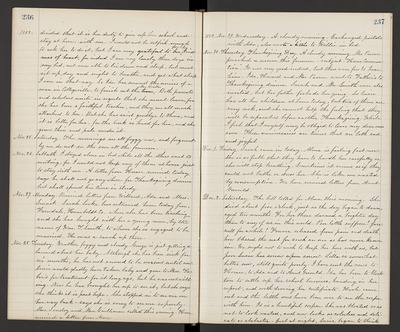 1882. decided that it is her duty to give up her school and stay at home with me. I would not be selfish enough to ask her to do it, but I am very grateful to her for her kindness of heart, for indeed I am very lonely these days in my bed, not even able to lie down and sleep, but must sit up, day and night to breathe, and get what sleep I can in that way. So Ida has secured the services of a man in Collegeville, to finish out the term Mr. Crabbe. Both parents and scholars unite in regrets that she must leave, for she has been a faithful teacher, and they are all much attached to her. But she has said goodbye to them, and it is better for her, for the work is hard for her, and she grows thin and pale under it.

Nov. 25. Saturday. The mornings are all foggy now, and frequently we do not see the sun all the forenoon.

Nov. 26. Sabbath. I stayed alone in bed while all the others went to meeting, for I would not keep any of them at home just to stay with me. A letter from Horace received today says he shall not go any where for Thanksgiving dinner but shall spend his time in study.

Nov. 27. Monday. Received letters from Willard, Ada and Mrs. Smart. Sarah Locke has returned home today from Ferndale, Humboldt Co. where she has been teaching and she has brought with her a young man, by the name of Wm. T. Smith, to whom she is engaged to be married. He owns a ranch up there.

Nov. 28. Tuesday. Weather foggy and cloudy. George is just getting alarmed about his baby. Although she has been sick for six months, he has not seemed to be anxious until now. Susie would gladly have taken baby and gone to Mrs. Tabor's for treatment for it long ago, but he was not willing. Now he has brought her up to see it, but she says she thinks it is past hope. She stopped in to see me on her way back - says she is sorry to see me so poorly. Mrs. Sandoz and Mrs. Guilleman called this evening. Have received a letter from Mary.

Nov. 30. Thursday. Thanksgiving Day. A cloudy morning. Mr. Pascoe preached a sermon this forenoon - subject - "Home Conversation." It was very good indeed, but there were few to hear him. Ida, Howard and Mr. Pascoe went to Father's to Thanksgiving dinner. Sarah and Mr. Smith were also invited, but her father forbade her going. So Susie has all her children at home today, but two of them are very sick, and she cannot help the feeling that they will be separated before another Thanksgiving. While I feel that I myself may be obliged to leave my dear ones soon. These anniversaries are times that are both sad and joyful.

Dec. 1. Friday. Sarah came in today. Alma is failing fast now. She is so feeble that they have to handle her carefully or she will stop breathing. Sometimes it seems as if they could not bathe or dress her. She is like one wasted by consumption. We have received letters from Aunt Gerould.

Dec. 2. Saturday. The bell tolled for Alma this morning. She died about five o'clock, just as the day began to dawn, aged ten months. For her there dawned a brighter day than to any of us in this world. Poor little sufferer! farewell for awhile! Forever released from pain and death, how blessed the rest for such an one as has never known sin. We ought not to wish to keep her here with us, but poor Susie has sorrow upon sorrow. Lilla is somewhat better now, still quite poorly. I have sent the news to Horace, to Ada and to Aunt Gerould. Ida has been to Stockton to settle up her school business, handing in her report, and with drawing her certificate. Uncle came out and the little ones have been over to see the corpse with him. It is a beautiful corpse. She was bloated so as not to look wasted, and now looks as colorless and delicate as alabaster. Just at night, Susie began to think