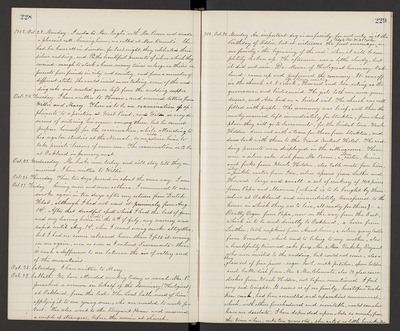 1882. Oct. 23. Monday. I rode to Mrs. Inglis with Mr. Pascoe and made a pleasant call. Coming home, we called at Mrs. Bruml's. She had her house all in disorder, for last night, they celebrated their silver wedding, and Oh! the beautiful presents of silver which they received - enough to stock a house many times as large as theirs is - presents from friends in city and country, and from a number of different states. She would insist on our taking some of the wedding cake and roasted goose left from the wedding supper.

Oct. 24. Tuesday. I have written to Horace, and received letters from Willie and Mary. There is to be an examination of applicants to a position at West Point, and Willie is very desirous of entering his name among them, but he cannot prepare himself for the examination, while attending to his regular studies at the Normal, so we will advise him to take private lessons of some one. The examination is to be at Oakland in January next.

Oct. 25. Wednesday. Mr. Cooke came today and will stay till they are married. I have written to Willie.

Oct. 26. Thursday. These two days passed in about the same way. I am

Oct. 27. Friday. having more and more asthma. I commenced to use smoke again in ten days after my return from Dutch Flat, although I had not used it previously from Aug. 1st. After that dreadful spell which I had the last of June and my leaving home (Lodi) on the 4th of July, my recovery was rapid until Aug. 1st, when i ceased using smoke altogether, but I had no sooner returned home than I felt it coming on me again, even as soon as I entered Sacramento there is such a difference to me between the air of valley and of the mountains.

Oct. 29. Sabbath. We have attended meeting today as usual. Mr. P. preached a sermon in behalf of the Seminary (Theological) at Oakland, from the text "The Lord Hath need of him". applying it to our young men, who are needed to work for God. he also went to the Bryant House and married a couple of strangers, before the service at church.

1882. Oct. 30. Monday. An important day in our family, for not only is it the birthday of Eddie, but it witnesses the first marriage, Ada &. Rev. W.H. Cooke in our family - "the beginning of the end" - when it will be completely broken up. The afternoon was a little cloudy, but it did not rain. Dr. Mooar of Theological Seminary - Oakland - came up and performed the ceremony. It came off in the church at 8 o'clock, Mr. Pascoe assisting, Howard and Ida acting as the groomsman and bridesmaid. The girls both wore moss-green dresses, and Ada had on a bridal veil, The church was well filled with people. The ceremony was brief, and then the newly married left immediately for Stockton, from which place they will go to Sacramento, for the bridal tour. Uncle Holden drove out with a team for them from Stockton, and drove back with them to the Grand Central Hotel. The wedding presents were displayed in the sittingroom. There were a silver cake - dish from Mr. Pascoe, a silver castor, knives and forks from Uncle Holden, also table mats from him, a silver pickle castor from Ida, silver spoons from Luther and Howard - large and small - a set of crockery of 144 pieces from Papa and Mamma (which is to be bought by themselves at Oakland and immediately transferred to the house in which they are to live, all ready for them) - a Beatty Organ from Papa, now on the way from the East, which is to be sent directly to Oakland, a horse from Luther, table napkins from Aunt Susie, a silver gravy ladle from Grandma, which used to belong to my mother, also a beautifully trimmed cake from Mr. & Mrs. Berkeley Bryant who were invited to the wedding, but could not come, also a blue glass set of four pieces - sugar -bowl, milk pitcher, spoon holder and butter dish from Mr & Mrs. Clements, also 12 glass sauce dishes from Uncle Holden, not before mentioned. I feel very sad tonight. It seems as if our family, heretofore an unbroken cuick, had been assaulted, and separations commenced, which, with others foreshadowed and inevitable, would somehow leave one desolate. I have depended upon Ada so much, from the time when, only ten years old, she acted as little housekeeper