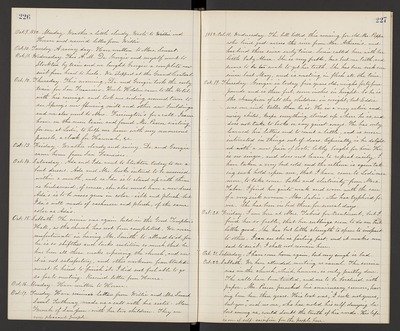 Oct. 11. Wednesday. This A.M. Dr. Georgie and myself went to Stockton by train and we bought Georgie a complete new suit from head to heels. We stopped at the Grand Central.

Oct. 12. Thursday. This morning, Dr. and Georgie took the early train for San Francisco. Uncle Holden came to the Hotel with his carriage and took me riding around town to see Sperry's new flouring mill and other new buildings and we also went to Mrs. Farrington's for a call. I came home on the noon train and found Mr. Pascoe waiting for me at Lodi, to help me home with my numerous parcels, a clock for Hannah, &.c.

Oct. 14. Saturday. Ada and Ida went to Stockton today to see about dresses. Ada and Mr. Cooke intend to be married within a month, and as Ida is to stand up with them as bridesmaid, of course, she also must have a new dress. Ada's is to be moss green in color - silk and plush - but Ida's will made of cashmere and plush, of the same color as Ada's.

Oct. 15. Sabbath. The service was again held in the Good Templar's Hall, as the church has not been completed. We were unfortunate in having Mr. Smith to attend to it, for he is so shiftless and lacks ambition so much, that he has been all these weeks repairing the church, and now it is not satisfactory, and other workmen from Stockton must be hired to finish it. I did not feel able to go so far to meeting. Received letter from Horace.

Oct. 16. Monday. Have written to Horace.

Oct. 17. Tuesday. Have received letters from Willie and Mrs. Smart. Saml. Tretheway made us a call with his sister - Mrs. French of San Jose - with her two children. They are very pleasant people.

1882. Oct. 18, Wednesday. The bell tolled this morning for old Mr. Poppe who lived just across the river from Mr. Arthearn's, and has lived there since early times. Susie called here with her little baby Alma. She is very feeble, has but one tooth and seems to be too weak to get her teeth. She has been sick ever since last May, and is wasting in flesh all the time.

Oct. 19. Thursday. Georgie is today five years old, weighs forthy four pounds and is three feet, seven inches in height. So he is the champion of all the children in weight, but Eddie was one inch taller than he is. He is a very active and noisy child, keeps everything stirred up where he is, and does not take to books or any quiet ways. He has only learned his letter and to count a little, and is more interested in things out-of-doors. Especially is he delighted with a new pair of boots, lately bought for him. He no singer, and does not learn to repeat easily. I have taken a very bad cold and the asthma is again taking such hold upon me, that I have come to Lodi once more to take some baths and electricity from Mrs. Tabor. I find her quite weak and worn with the case of a very sick woman - Mrs. Sabin - who has typhoid fever. She has been in bed there for several days.

Oct. 20. Friday. I am here at Mrs. Tabor's for treatment, but I find her so feeble, that her rubbings seem to do one but little good. She has but little strength to spare to impart to others. I can see she is failing fast, and it makes me sad to see it. I shall not remain here.

Oct. 22. Sabbath. We have attended meeting as usual. The service was in the church, which, however, is only partly done. The walls have been tinted, and are to be bordered with paper. Mr. Pascoe preached his anniversary sermon, having been here three years. His test was, "I seek not yours, but you", and no one, who has noted his self-denying labors among us, could doubt the truth of his words. His life is one of self-sacrifice for the people here.