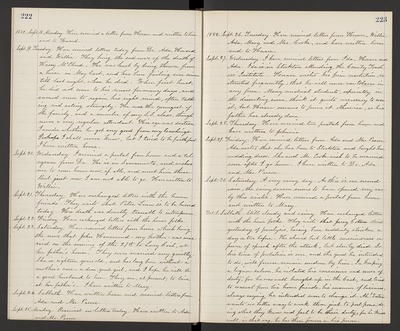 1882. Sept. 18. Monday. Have received a letter from Horace and written to him and to Howard.

Sept. 19. Tuesday. Have received letters today from Dr. Ada, Howard and Willie. They bring the sad news of the death of Harry McCloud. He was hurt by being thrown from a horse in May last, and has been failing ever since till last night, when he died. When first hurt, he did not come to his senses for many days, and seemed never to regain his right mind, often talking and acting strangely. He was the youngest of the family, and a member of my S.S. class, though never a very regular attendant. His age was sixteen. I wonder whether he got any good from my teachings. Perhaps I shall never know, but I tried to be faithful. I have written home.

Sept. 20. Wednesday. I received a postal from home and a telegram from Dr. He is in Sacramento, and wishes me to come home now, if able, and meet him there. But just now I am not able to go. Have written to Willie.

Sept. 21. Thursday. Have exchanged letters with the home friends. They write that Peter Linn is to be buried today. His death was directly traceable to intemperance.

Sept. 23. Saturday. Have received letters from home which bring the news that John Hammond - my brother - was married on the evening of the 21st to Lucy Coil, at her father's house. They were married very quietly. She is eighteen years old, and has long been without a mother's care - a dear, good girl, and I hope he will be a good husband to her. They are, at present, to live at her father's. I have written to Mary.

Sept. 24. Sabbath. Have written home and received letters from Ada and Mr. Pascoe.

Sept. 25. Monday. Received no letters today. Have written to Ada and Mr. Pascoe.

1882. Sept. 26. Tuesday. Have received letters from Horace, Willie, Ada, Mary and Mrs. Cooke, and have written home and to Horace.

Sept. 27. Wednesday. I have received letters from Ida, Horace and Ada. Ida is in Stockton attending the County Teachers' Institute. Horace writes his firm resolution, reiterated frequently, that he will never use tobacco in any form. Many medical students, especially in the dissecting room, think it quite necessary to use it, but Horace means to prove it otherwise, as his father has already done.

Sept. 28. Thursday. Have received two postals from home and have written to Johnnie.

Sept. 29. Friday. Have received letters from Ada and Mrs. Pascoe. Ada writes that she has been to Stockton and bought her wedding dress. She and Mr. Cooke wish to be married soon after I go home. I have written to Dr. Ada and Mr. Pascoe.

Sept. 30. Saturday. A very rainy day. As this is our second rain, the rainy season seems to have opened very early this winter. Have received a postal from home and written to Mary.

Oct. 1. Sabbath. Still cloudy and rainy. Have exchanged letters with the home folks. They write that Jersy Cotton died yesterday of paralysis, having been suddenly stricken a day or two before. He showed but little consciousness or power of speech after the attack, but slowly died. So this time of probation is over, and the good he intended to do, will forever remain undone by him. In keeping a liquor saloon, he violated his conscience and sense of duty, for he wes well brought up in the East, and tried to conceal from his home friends, his manner of business, always saying he intended soon to change it. Ah! Satan wants no better way to work with them just to postpone doing what they know and feel to be their duty, for he knows well, in that way, he has them forever in his power.