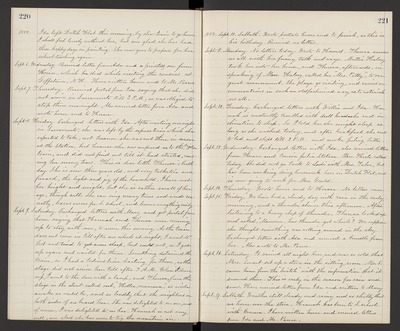 1882. Ida left Dutch Flat this morning, by slow train to go home. I shall feel lonely without her, but am glad she has had these happy days in painting. She now goes to preprare for her school-teaching again.

Sept. 6. Wednesday. Received letter from Ada and a printed one from Horace, which he did while visiting the cousins at Goffstown, N.H. Have written home and to Mr. Pascoe.

Sept. 7. Thursday. Received postal from Ida saying the she did not arrive in Sacramento till 3 P.M , so was obliged to stop there overnight. Also received letter fro Ada and wrote home and to Horace.

Sept. 8. Friday. Exchanged letters with Ida. After waiting overnight in Sacramento, she was left by the express train which she expected to take, not because she was not there in season at the Station, but because she was confused as to the right train, and did not find out till it had started, causing her many tears. This is dear little Theresa's birthday. She is now three years old, and very talkative and forward, the light and joy of the household. I have not her height and weight, but she is rather small of her age, though well. She can sing many times and words correctly, learns verses for S. School, and learns everything easily.

Sept. 9. Saturday. Exchanged letters with Mary and got postal from home saying that Hannah and Theresa were coming up to stay with me, to arrive this evening. As the train does not come in till after one o'clock at night, I went to bed and tried to get some sleep, but could not, so I got up again and waited for them. Something detained the train, so I had a tidious time waiting for them, as the stage did not arrive here till after 3 A.M. When it drove up, I went to the door with a lamp, and Theresa, from the stage in the street called out, "Holloa mamma", as wide awake as could be, and so loudly that the neighbors on both sides of us heard her. She was delighted to see me, and of course, I was delighted to see her. Hannah is not very well, am glad she has come to try the mountain air.

1882. Sept. 10. Sabbath. Wrote postals home and to Josiah, as this is his birthday. Received no letters.

Sept. 11. Monday. No letters today. Wrote to Howard. Theresa amuses us all with her funny talk and ways. Mattie Halsey took her into her house, and Theresa, afterwards, in speaking of Mrs. Halsey, called her "Mrs. Patty", to our great amusement. She plays go visiting, and carries on conversations in such an old fashioned way, as to astonish us all.

Sept. 12. Tuesday. Exchanged letters with Willie and Ida. Hannah is constantly troubled with dull headache and inclination to sleep. So I told her she might sleep as long as she wished today, and after breakfast she went to bed and slept till 2 P.M. and awoke feeling better.

Sept. 13. Wednesday. Exchanged letters with Ida, also received letters from Horace and Cousin Julia Stetson. Mrs. Hiele called today. She did not go back to Lodi with Mrs. Tabor, but has been working doing housework here in Dutch Flat, and is now going to work for Mrs. Gould.

Sept. 14. Thursday. Wrote home and to Horace. No letters came.

Sept. 15. Friday. We have had a cloudy day with rain the early morning, and a thunder shower this afternoon. After listening to a heavy clap of thunder, Theresa looked up and asked, "Mamma, has thunder got wheels?" We suppose she thought something was rolling around in the sky. Exchanged letters with Ada and received a bundle from her. Also wrote to Mr. Pascoe.

Sept. 16. Saturday. It rained all night here, and was so cold that Mrs. Smart set up a store in the sitting room. Mr. S. came home from the "Switch" with the information that it snowed there. This is early in the season for rain and snow. Have received letter from Ida and written to Mary.

Sept. 17. Sabbath. Weather still cloudy and rainy and so chilly that we hover over the stove. Hannah has been to S. school with Emma. I have written home and received letters from Ida and Mr. Pascoe.