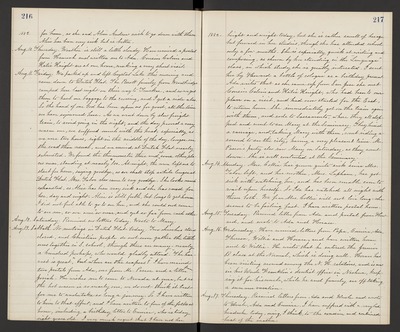 1882. for home, as she and Alice Andrew wish to go down with them. Alice has been very sick but is better.

Aug. 10. Thursday. Weather is still a little cloudy. Have received a postal from Hannah and written one to Ada. Cousin Calvin and Katie Knight are at our home, making a very short visit.

Aug. 11. Friday. We packed up and left Crystal Lake this morning and came down to Dutch Flat. The Peerott family from Woodbridge camped here last night on their way to Truckee, and so we got them to haul one baggage to the crossing, and I got a side also. So "the hand of our God has been upon us for good", all the time we have sojourned here. As we went down by slow freight train, to avoid going in the night, and the day proved a very warm one, we suffered much with the heat, especially as we were two hours, right in the middle of the day, longer on the road than usual, and we arrived at Dutch Flat nearly exhausted. We found the thermometer there and at some other places near, standing at nearly -100. At night, the men left us to start for home, saying goodbye, as we shall stop awhile longer at Dutch Flat. Mrs. Tabor also came to say goodbye. She looks much exhausted, as Alice has been very sick and she has cared for her, day and night. Alice is still feeble, but longs to get home. I did not feel able to go to see her, and she could not come to see me, so we were "so near, and yet so far" from each other.

Aug. 13. Sabbath. No meetings in Dutch Flat today. Two churches stand closed, and Christian people do not even gather the little ones together in S. School, though there are many - nearly a hundred perhaps, who would gladly attend. "The harvest is great", but "where are the reapers?" I have received two postals from Ada, one from Mr. Pascoe and a letter from Josiah. He wishes me to come to Nevada at once, but as the hot season is so nearly over, we do not think it best for me to undertake so long a journey. So I have written to him to that effect, and I have written to four of the folks at home, including a birthday letter to Eunice, who is today eight years old. I very much regret that I have not her

1882. height and weight today, but she is rather small of her age but forward in her studies, though she has attended school only a few months. She is especially quick as writing and composing, as shown by her standing in the "Language" class, in which study she is greatly interested. I sent her by Howard a bottle of cologne as birthday present. Ada writes that as she came up from San Jose she met Cousin Calvin and Katie Knight, who had been to our place on a visit, and had now started for the East, to return home. She immediately got on the train again with them, and rode to Sacramento, where they all stopped and went to see Mary at the Seminary. They hired a carriage, and, taking Mary with them, went riding around to see the city, having a very pleasant time. Mr. Pascoe's party also saw Mary on Saturday, as they went down. She is well contented at the Seminary.

Aug. 14. Monday. Mrs. Collie has grown quite sick since Mrs. Tabor left, and her mother, Mrs. Lapham, has got sick with watching her, and has been unable even to wait upon herself. So Ida has watched all night with them both. We fear Mrs. Collie will not live long - she seems to be failing fast. I have written postal home.

Aug. 15. Tuesday. Received letter from Ada and postal from Howard, and wrote to Ada and Horace.

Aug. 16. Wednesday. Have received letters from Papa, Eunice, Ada, Theresa, Willie and Horace, and have written home and to Willie. He writes that he entered the Junior B class at the Normal, which is doing well. Horace has been visiting around among the N. H. relatives, and is now in his Uncle Franklin's dentist office in Nashua, keeping it for his uncle, while he and family are off taking a summer vacation.

Aug. 17. Thursday. Received letters from Ada and Uncle and wrote to Uncle, Ada and Eunice. I have suffered with very bad headache today, owing, I think, to the excessive and continued heat of the weather.