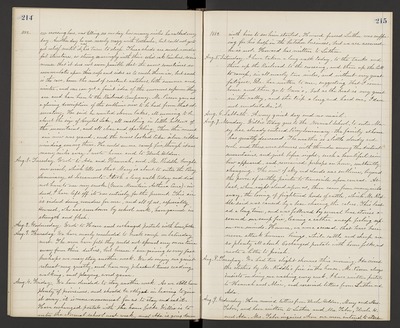 1882. our crossing here, was telling us one day how many miles he walked every day. Another day he was nearly crazy with toothache, but could not go to get relief until it was his turn to sleep. These sheds are most wonderful structures, so strong seemingly with their solid oak timbers, so immense that it does not seem possible that the snow sometimes so accumulates upon their roofs and sides as to crush them in, but such is the case, hence the need of constant watchers, both summer and winter, and one can get a faint idea of the enormous expense they are and have been to the Railroad Company. Mr. Pascoe gave us a glowing description of the sublime view to be had from that observatory. He said he counted eleven lakes, all seeming to be about the size of Crystal Lake, all mistling in little hollows of the mountains, and all clear and sparkling. Then the mountain view was grand, and the rivers looked like silver ribbons winding among them. He could see our camp fire, though it was many miles away. I wrote home and to Uncle Holden.

Aug. 1. Tuesday. Wrote to Ada and Hannah, and Mr. Riddle brought our mail, which tells us that Mary is about to enter the Percy Seminary at Sacramento. I took a long walk today and did not have to use my smoke (Green Mountain Asthma Cure) - indeed, I have left off its use entirely for the present. This air is indeed doing wonders for me, and all of us, especially Howard, who was run down by school work, have gained in strength and flesh.

Aug. 3. Thursday. We have nearly concluded to break camp on Saturday next. The men have felt they could not spend any more time away from their duties, but because I am gaining so very fast perhaps we may stay another week. We do enjoy our quite retreat very greatly, and have very pleasant times reading, walking, and playing word game.

Aug. 4. Friday. We have decided to stay another week. As we still have plenty of provisions, and should be obliged in leaving to give it away, it is more economical for us to stay and eat it. Have exchanged postals with the home folks. Willie is to enter the Normal School next week, and Ada is going down

1882 with him to see him started. Howard feared Luther was suffering for his help in the butcher business, but we are assured he is not. Howard has written to Luther.

Aug. 5. Saturday. I have taken a long walk today, to the tanks and then up the Railroad to the crossing, and then up the hill to camp, in all nearly two miles, and without very great fatigue. Dr. has written to me, suggesting that I come home and then go to Guve's, but as the heat is very great in the valley, and the trip a long and hard one, I dare not undertake it.

Aug. 7. Monday. Willie today goes to the Normal School, to enter. Mary has already entered Percy Seminary - the family at home has greatly decreased. The weather is a little cloudy and cool, and there were showers with thunder among the distant mountains, and just before night, such a beautiful rainbow appeared, and remained perhaps an hour, constantly changing. The view of sky and clouds was sublime, beyond the power of earthly painter to transcribe upon canvas. At last, when night closed upon us, there came from many miles away, the looing of frightened herds of cattle, which Mr. Riddle said was caused by a bear chasing the calves. This lasted a long time, and was followed by several bear stories around our camp fire, leaving a rather unsafe feeling upon our minds. However, we were assured that bears here never attack human beings, while cattle and sheep are so plenty all about. Exchanged postals with home folks, and wrote a letter to Josiah.

Aug. 8. Tuesday. We had two slight showers this morning. Ida ironed clothes by Mr. Riddle's fire in the house. Mr. Pascoe always insists on doing our washing every week. I have written postals to Hannah and Alice, and received letters from Luther and Ada.

Aug. 9. Wednesday. Have received letters from Uncle Holden, Mary and Mrs. Tabor, and have written to Luther and Mrs. Tabor, Uncle H. and Ada. Mrs. Tabor inquires when our men intend to start