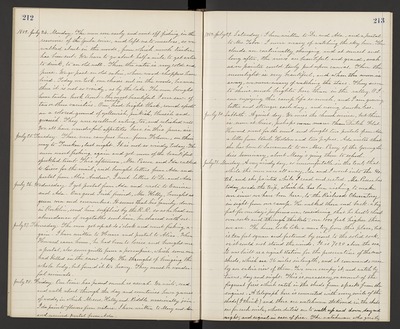 1882. July 24. Monday. The men rose early and went off fishing in the reservoir of the Yuba river, and left us to ourselves, so we walked about in the woods, from which much timber has been cut. We have to go about half a mile to get water to drink, to an old well. There the water is very cold and pure. We go past an old cabin, where wood-choppers have lived. Today we took our chairs out in the woods, because there it is not so windy, as by the lake. The men brought home twelve brook trout - the most beautiful I ever saw - of two of three varieties. One variety had bright black, round spots on a colored ground of yellowish, pinkish, bluish and greenish. They were excellent eating, too, and relished well. We all have wonderful appetites here in this pure air.

July 25. Tuesday. There were campers here from Folsom, on their way to Truckee, last night. It is not so windy today. The men went fishing again and got more of the beautiful speckled trout. This afternoon, Mr. Pascoe and Ida walked to Cisco for the mail, and brought letters from Ada and postal from Alice Andrew. I sent letters to Dr. and Ada.

July 26. Wednesday. I got postal from Ada and wrote to Eunice and Ada. Our good Irish friend, Mr. Kelly, brought us green corn and cucumbers. It seems that his family, down in Rocklin, send him supplies by the R.R. so as he had an abundance of vegetables sent him, he shared with us.

July 27. Thursday. The men got up at 4 o'clock and went fishing again. I have written to Horace and postal to Alice. When Howard came home, he had been to Cisco and brought me a postal, also some quills from a porcupine, which someone had killed in the snow sheds. He thought of bringing the whole body, but found it too heavy. They must be wonderful animals.

July 28. Friday Our time has passed much as usual. We write, read, and walk about through the day and sometimes have games of words, in which Messes. Kelly and Riddle occasionally join. Ida paints flowers from nature. I have written to Mary and Ada and received postal from Ada.

1882. July 29. Saturday. I have written to Dr. and Ada, and a postal to Mrs. Tabor. I never weary of watching the sky here. The clouds are continually changing and at sunset and long after, the views are beautiful and grand, such as no painter could truly put upon canvas. Then the moonlight is very beautiful, and when the moon is away, we never weary of watching the stars. They seem to shine much brighter here than in the valley. O I am enjoying this camp life so much, and I am growing better and stronger each day, and using smoke less.

July 30. Sabbath. A quiet day. We miss the church service, but there is none at Cisco, perhaps none nearer than Dutch Flat. Howard went for the mail and brought two postals from Ada a letter from Uncle Holden and two papers. Ada writes that she has been to Sacramento to see Mrs. Percy of the Young Ladies Seminary, about Mary's going there to school.

July 31. Monday. A very windy day, so uncomfortable in the tent, that while the men were all away, Ida and I went into the Hotel, and she painted while I read and rested. Mr. Pascoe has today made the trip, which he has been wishing to make ever since we have been there, to the Railroad Observatory, in sight from our camp. He walked there and back-a-big feat for one days performance, considering that he had to climb over rocks and through thickets over 1000 feet higher than we are. The house looks like a mere toy from this place, but is ten feet square and fastened by irons to the solid rock, or it could not stands the winds. It is 7020 above the sea. It was built as a signal station for the preservation of the snow sheds, which are 36 miles in length, and it commands nearly an entire view of them. Two men occupy it, and watch by turns, day and night. This is necessary, on account of the frequent fires which catch in the sheds from sparks from the engines. A telegraph here is connected with every mile of the sheds (I think) and there are watchmen stationed in the sheds one for each mile, whose duties are to walk up and down, day and night, and signal in case of fire. The watchman who goes by