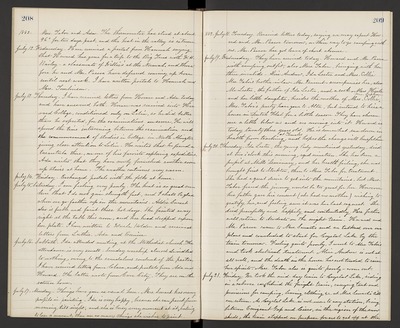 1882. Mrs. Tabor and Ada. The thermometer has stood at about 96- for two days past, and the heat in the valley is extreme.

July 12. Wednesday. Have received a postal from Hannah saying that Howard has gone for a trip to the Big Trees with W.H. Bailey - a classmate of Willies' as the Normal, and therefore he and Mr. Pascoe deferred coming up here until next week. I have written postals to Hannah and Mrs. Tomlinson.

July 13. Thursday. I have received letters from Horace and Ada today and have answered both. Horace was received into Harvard College, conditioned only on Latin, so he did better than he expected, for the examinations are severe, He will spend the time interviewing between the examination and the commencement of studies in College in North Abington giving close attention to Latin, He writes that he found a tarantula there, on one of his favorite exploring expeditions. Ada writes that they have newly furnished another soon up stairs at home. The weather continues very warm.

July 14. Friday. Exchanged postals with the folks at home.

July 15. Saturday. I am feeling very poorly. The heat is so great even here that I do not gain strength fast, and I shall be glad when we go farther up in the mountains. Addie Smart also is feeble and faint these hot days. She fainted away right at the table this noon, and her head dropped upon her plate. I have written to Uncle Holden and received letters from Luther, Ada and Eunice.

July 16. Sabbath. Ida attended meeting as the Methodist church. The attendance is very small - Sunday worship almost dwindled to nothing, owing to the scandalous conduct of the pastor. I have received letter from Clara, and postals from Ada and Howard. The latter wrote from Cave City. They are on the return home.

July 17. Monday. Things have gone as usual here. Mrs. Smart has many pupils in painting. Ida is very happy, because she can paint from morning till night, and she is busy every moment of it, hating to lose a moment, there are so many things she wishes to paint.

1882. July 18. Tuesday. Received letters today, saying we may expect Howard and Mr. Pascoe tomorrow, on their way to go camping with us. Mr. Pascoe has got leave of short absence.

July 19. Wednesday. They have arrived today. Howard and Mr. Pascoe with camping outfit, also Mrs. Tabor, bringing with her three invalids - Alice Andrew, Ida Lester and Mrs. Collie Mrs. Tabor's brother-in-law - Mr. Vincent - accompanies her, also Mr. Lester, the father of Ida Lester and a cook - Mrs. Hiele and her little daughter, besides the mother of Mrs. Collie, Mrs. Lapham Mrs. Tabor's party have gone to Alta, but intend to hire a house in Dutch Flat for a little season. They have chosen one a little below us and are moving into it. Howard is today twentythree years old. He is somewhat run down in health from teaching at Tomales, and hopes the change will benefit him.

July 20. Thursday. Ida Lester, the young lady mentioned yesterday, died at two o'clock this morning, aged nineteen. She has been a pupil at Mills Seminary, and her health failing, she was brought first to Stockton, then to Mrs. Tabor for treatment. She had a great desire to get into the mountains, but Mrs. Tabor feared the journey would be too great for her. However her father gave his consent (she had no mother) wishing to gratify her, and feeling sure it was her last request. She died peacefully and happily and contentedly. Her father will return to Modesto on the night train. Howard and Mr. Pascoe came to Mrs. Smart's and we talked over our plans and concluded to start for Crystal Lake by the train tomorrow. Feeling quite poorly, I went to Mrs. Tabor's and took electrical treatment. Alice Andrew is not at all well, and the death in the house has not tended to raise her spirits. Mrs. Tabor also is quite poorly-worn out.

July 21. Friday. We took the mid-day train to Crystal Lake, riding in a caboose car behind the freight train, carrying tent and provisions for camping, leaving clothing, &.c. at Mrs. Smart's till our return. As Crystal Lake is not near to any station, being between Emigrant Gap and Cisco, in the region of the snow sheds, the train stopped on purpose for us to get off as the