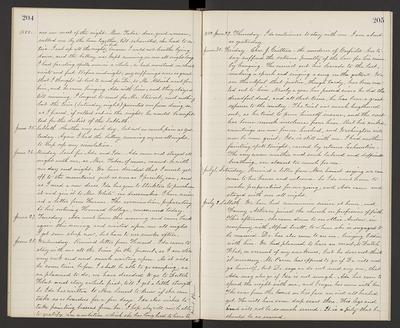 1882. over me most of the night. Mrs. Tabor - dear, good woman, rubbed me by the hour together, till exhausted, she had to retire. I sat up all the night in bed, because I could not breathe lying down, and the battery was kept running on me all night long. I had fainting spells once in a while, so had mustard on chest wrists and feet. Before midnight, my sufferings were so great that I thought it best to send for Dr., so Mrs. Aldrich went for him, and he came bringing Ada with him, and they stayed till morning. I longed to send for Mr. Stewart, and nothing but time ( Saturday night ) prevented me from doing so, as I feared, if called out in the night, he would be unfitted for the duties of the Sabbath.

June 25. Sabbath. Another very sick day, but not so much pain as yesterday. Again I had the battery running on me all the night, to keep up my circulation.

June 26. Monday. Sent for Ada and Ida. Ada came and stayed all night with me, as Mrs. Tabor, of course, cannot be with me day and night. We have decided that I must get off to the mountains just as soon as I possibly can, and as I need a new dress, Ida has gone to Stockton to purchase it and give it to Mrs. White - our dressmaker. I have received a letter from Horace. The examination preparatory to his entering Harvard College, commences today.

June 27. Tuesday. Ada went home this morning and came back again this evening and waited upon me all night. I get some sleep now, but have to use smoke often.

June 28. Wednesday. Received letter from Howard. Ida came to stay with me all the time for the present, as I am still very sick and need much waiting upon. As it will be some time before I shall be able to go camping, as we planned to do, we have decided to go to Dutch Flat and stay awhile first, till I get a little strength. So Ida has written to Mrs. Smart to know if she can take us as boarders for few days. Ida also wishes to take painting lessons from her. I hope she will now be able to gratify an ambition which she has long had to learn to paint flowers.

June 30. Friday. Chas. J. Guittean - the murderer of Garfield - has today suffered the extreme penalty of the law for his crime, by hanging. He carried out his bravado to the last, making a speech and singing a song on the gallows. We are thankful that justice, though tardy, has been meted out to him. Nearly a year has passed since he did the dreadful deed, and all that time, he has been a great expense to the country. The trial was much lengthened out, as he tried to prove himself insane, and the court has borne much insolence from him. But his wicked, vauntings are now forever hushed, and Washington will now be more quiet. Ida is still with me. I had another fainting spell tonight, caused by extreme lexhaustion. The very warm weather and such labored and difficult breathing, are almost too much for me.

July 1. Saturday. Received a letter from Mrs. Smart saying we can come to her house and welcome. So Ida went home to make preparations for our going, and Ada came and stayed with me all night.

July 2. Sabbath. We have had communion service at home, and Fanny Athearn joined the church on profession of faith. This afternoon, she came down to see Alice Andrew, in company with Alfred Swett, to whom she is engaged to be married. Dr. has also come to see me, bringing Eddie with him. We had planned to have an escort, to Dutch Flat, on account of my weakness, but he does not think it necessary. Mr. Pascoe has offered to go if Dr. will not go himself, but Dr. says we do not need any one, that Ada may also go if Ida is not enough. Ada has come to spend the night with me, and Georgie has come with her. The sores from the burns on his face are not all healed yet. He will have some deep scars there. His legs and hand will not be so much scarred. It is a pity that he should be so scarred.