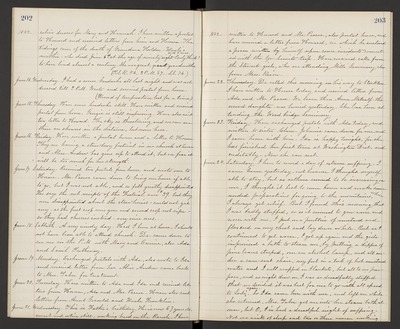 1882. calico dresses for Mary and Hannah. I have written a postal to Howard and received letters from him and Horace. The tidings come of the death of Grandma Holden - Uncle's mother - who died June 6th at the age of ninety eight and 5 mos. Only think! to have lived almost a century. She was great, great grandmother. (T.S.R. 54. 2 P.M. 87. S.S. 74.)

June 14. Wednesday. I had a severe headache all last night and was not dressed till 3 P.M. wrote and received postal from home. (Record temperature lost for a time.)

June 15. Thursday. Have some headache still. Have written and received postal from home. Georgie is still improving. Have also written letter to Howard. The sky is threatening and we can see there are showers in the distance, but none here.

June 16. Friday. Have written a postal home and a letter to Horace. They are having a strawberry festival in our church at home and Alice Andrew has gone up to attend it, but we fear it will be too much for her strength.

June 17. Saturday. Received two postals from home and wrote one to Horace. Mr. Pascoe came down to bring me home if able to go, but I was not able, and so felt greatly disappointed. He says the net receipts of the Festival were $39. but they were disappointed about the strawberries - could not get any - as the first crop were gone and second crop not ripe - so they had cherries instead - very nice ones.

June 18. Sabbath. A very windy day. Had I have been at home, I should not have been able to attend church. Dr. came down to see me in the P.M with Mary and Eunice, also Ada and Sam'l Tretheway.

June 19. Monday. Exchanged postals with Ada, also wrote to Ida and received letter from her Alice Andrew came back to Mrs. Tabor for treatment.

June 21. Wednesday. This is Father's birthday. He is now 67 years old, smart and active still, working hard on the Ranch. I have

1882. written to Howard and Mr. Pascoe, also postal home, and have received a letter from Howard, in which he enclosed a poem written by himself upon some incidents connected with the Yo-Semite trip. Have received calls from the Stewart girls, who are attending Mills Seminary, also from Mrs. Rixon.

June 22. Thursday. Dr. called this morning on his way to Stockton. I have written to Horace today and received letters from Ada and Mr. Pascoe. We learn than Anna Metcalf - the second daughter was buried yesterday. She has been attending the Wood bridge Seminary.

June 23. Friday. Have exchanged postals with Ada today, and written to sister Clara. Johnnie came down for me and I came home with him. Ida is happy tonight, for she has finished her first term at Washington Dist. and creditably. Now she can rest.

June 24. Saturday. I have to record a day of extreme suffering. I came home yesterday, not because I thought myself able to stay, but as asthma seemed to be increasing on me, I thought it best to come home and make some needed preparations for going to the mountains, where I always get relief. But I found this morning, that I was badly stuffed, so as it seemed to grow worse and worse with me, I put on a poultice of mustard and flax seed on my chest and lay down awhile. But as I continued to get worse, I got up again and the girls improvised a bath to steam me, by putting a dipper of pine leaves steeped, over an alcohol lamp, and all under a cane-seat chair, my feet in a tub of hot mustard water and I well wrapped in blankets, but all to no purpose, and as night drew on, I was so dreadfully stuffed that we decided it was best for me to go with all speed to Lodi again. So Ida came here with me, and left me while she returned. Mrs. Tabor got me into her steam bath at once, but O, I've had a dreadful night of suffering. Not one wink of sleep and two or three women working