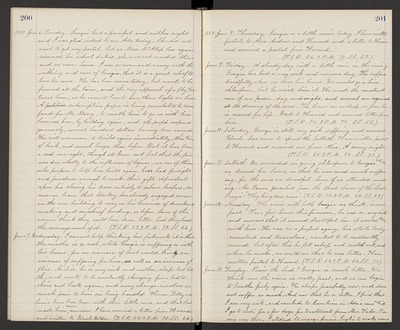 1882. June 6. Tuesday. Georgie had a painful and restless night and I was glad indeed to see Ada today. She did not wait to get my postal, as Miss McAllep has again resumed her school duties, she was not needed there and so came home. I am so worn and weary with the watching and care of Georgie, that it is a great relief to have her come. He has been easier today, but wants to be fanned all the time, and the very approach of a fly tortures him, as he cannot bear to have them light on him. A subscription paper is being circulated to raise funds for Mr. Stacey, to enable him to go on with his business here, by building again, and the people respond generously, several hundred dollars having been raised. He will commence to build again immediately, this time of brick, and much larger than before. But it has been a sad over-sight, though all know and feel that the fire was due wholly to the influence of liquor, no one of those who propose to help him build again, has had foresight and prudence enough to make their gifts dependent upon his closing doors entirely to saloon keepers, so now we learn that Starkey has already engaged rooms in the new building to carry on his business of drunkard making and mischief breeding, as before. Some of the women think they could have done better, had they had the management of it. (T.S.R. 53.2 P.M. 79 S.S. 64.)

June 7. Wednesday. I cannot help thinking how fortunate it is that the weather is so cool, while Georgie is suffering so with his burns, for an increase of heat would bring an increase of suffering for him, as well as an increase of flies. As it is, he is very sick and restless, sleeps but little, and wants to be constantly changing from bed to chair and back again, and every change involves so much pain to him in being handled. Horace, Dolly and Susie have been here with their little ones, and that has made him more nervous. I have received a letter from Howard and written to Uncle Holden. (T.S.R. 55.2 P.M. 76 S.S. 64.)

June 9. Friday. A cloudy day with a little rain the evening. Georgie has had a very sick and nervous day. He suffers dreadfully when we dress his burns. We would give him chloroform, but he resists it. He needs the constant care of one person, day and night, and several are required as the dressing of the sores. The burns are so deep, we fear he is scarred for life. Wrote to Howard and received letter from him. (T.S.R. 56. 2 P.M. 71. S.S. 66.)

June 11. Sabbath. We succeeded in giving chloroform to Georgie while we dressed his burns, so that he was saved much suffering, for the sores are dreadful. Some of us attended meeting. Mr. Pascoe preached from the third clause of the "Lord's Prayers" - "Thy kingdom come". (T.S.R. 54. 2 P.M. 82. S.S.69.)

June 12. Monday. The crisis with little Georgie we think, is now past. For a few hours this forenoon, he was so very sick and nervous that it seemed doubtful how it would turn with him. He was in a perfect agony, his whole body convulsed and tremulous, wanted to be constantly moved, but after this he fell asleep and rested well, and when he awoke, we could see that he was better. Have written postal to Howard. (T.S.R. 54. 2 P.M. 84 S.S. 71.)

June 13. Tuesday. Praise the Lord! Georgie is much better. We think now the crisis is really past, and we can begin to breathe freely again. He sleeps peacefully now, and does not suffer so much. And now that he is better, I find that I am very sick, and conclude to have him in Ada's care while I go to Lodi for a few days for treatment from Mrs. Tabor. On my way there, I stopped to engage Jeremie Inglis to make some