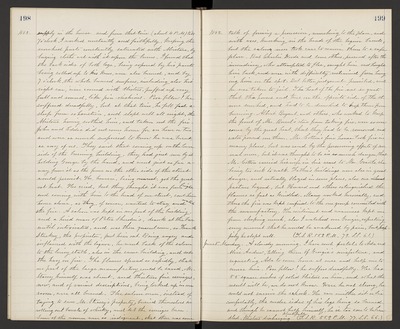 1882. supply in the house and from that time (about 4 P.M.) till 7 o'clock. I worked constantly and faithfully, keeping the scorched parts constantly saturated with Abietene, by laying cloths wet with it upon the burns. I found that the back sides of both legs, being exposed by his pants being rolled up to his knees, were also burned, and by 7 o'clock, the whole burned surfaces, including also his right ear, were covered with blisters, puffed up every full and round, like pin-cushions. Poor fellow! he suffered dreadfully, but at that time, he fell fast asleep from exhaustion, and slept well all night, the Abietene having soothed him, and taken out the fire. John and Eddie did not come home for an hour or two, and were as much surprised to know he was burnt, as any of us. They said that coming up on the lower side of the burning building, they had just run by it holding George by the hand, and went just as far away from it as the fence on the other side of the street would permit. He, however, being nearest, got the greatest heat. He cried, but they thought it was from fright and coming with him to the head of our street, sent him home alone, as they, of course, wanted to stay and watch the fire. A saloon was kept in one part of the building, and a hired man of Peter Sherden's, drank at the bar until intoxicated, and was then quarrel some, so Frank Starkey, the proprietor, put him out. Being angry and inflamed with the liquor, he went back of the saloon to the livery stable, also in the same building, and set the hay on fire. The flames spread so rapidly, that no part of the large manufactory could be saved. Mr. Stacey himself was absent, and thirteen fine carriages, new, and of various descriptions, being locked up in one room, were all burned. The saloon men, instead of trying to save Mr. Stacey's property, busied themselves in rolling out barrels of whisky, and let the carriages burn. Some of the women were so indignant, that there was some

1882. talk of forming a procession, marching to the place, and with axes, knocking in the heads of the liquor barrels, but the saloon men took care to remove them to a safe place. But Charlie Woods and some others, pursued after the incendiary, who attempted to flee, caught him and brought him back, and were with difficulty restrained from hanging him on the spot. But better judgment prevailed, and he was taken to jail. The heat of the fire was so great that the houses and trees on the opposite side of the St. were scorched, and had to be drenched to keep them from burning. Albert Bryant, and others, who worked to keep the front of Mr. Buml's store from taking fire, were so overcome by the great heat, that they had to be removed and water poured over them. Mr. Cotton's fine house took fire in many places, but was saved by the persevering efforts of several men, but it was thought to be in so much danger, that Mr. Cotton carried his wife in his arms to Mr. Grant's, she being too sick to walk. Father's buildings were also in great danger, and actually blazed in some places, also our pasture beyond, but Howard and others extinguished the flames as fast as kindled. Many worked heroically, and thus the fire was kept confined to the one group connected with the manufactory. The excitement and weariness kept me from sleeping much, also I watched over Georgie, expecting every moment that he would be awakened by pain, but happily he slept well. (T.S.R. 55. 2 P.M. 79. S.S. 61.)

June 5. Monday. A cloudy morning. I have sent postals to Ada and Alice Andrew, telling them of Georgie's misfortune, and requesting Ada to come home at once and help me to muse him. Poor fellow! he suffers dreadfully. He has 55 square inches of solid blisters on him, and what the result will be, we do not know. Were he not strong, he could not survive the shock. He can neither sit or lie comfortably, the under sides of his legs being so burned, and though he cannot help himself, he is too sore to be handled. Blisters discharging plentifully. (T.S.R. 55. 2 P.M. 77. S.S. 66.)