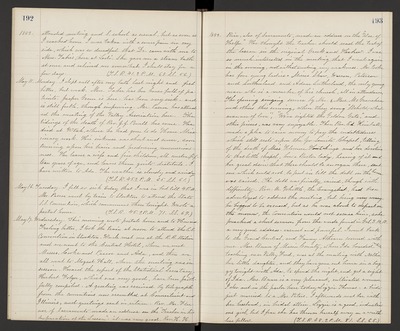 May 15. Monday. I slept well after my bath last night and feel better, but weak. Mrs. Tabor has her house full of patients. Jasper Green is here - has been very sick - and is still feeble, though improving. Mr. Pascoe has attended the meeting of the Valley Association here. The tidings of the death of Rev. J.J. Powell has come. He died at Utah, where he had gone to do Home Missionary work. His sickness was short and severe, soon turning upon his brain and producing unconsciousness. He leaves a wife and five children, all under fifteen years of age, and leaves them quite destitute. I have written to Ada. The weather is cloudy and windy. (T.S.R. 45. 2 P.M. 65. S.S. 61.)

May 17. Wednesday. This morning wrote postals home and to Howard. Feeling better, I took the train at noon to attend the S.S. Convention in Stockton. Uncle met me at the R.R. Station and we went to the Central Hotel, where we met Messes. Cooke and Pascoe and Ada, and then we all went to Mozart Hall, where the meeting was in session. Heard the report of the Statistical Secretary, Hubert Folger, which was very good, have been faithfully compiled. A greeting was received by telegraph from the conventions now assembled at Connecticut and Illinois, and greetings sent in return. Rev. Mr. Flunor of Sacramento made an address on the "Teacher in his preparation of the Lesson" - it was very good. Rev. H.H.

1882. Rice, also of Sacramento, made an address on the "Use of Helps". He thought the teacher should read the text of the lesson in the original Greek and Hebrew. I was so much interested in the meeting, that I went again in the evening, not withstanding my weakness. Mr. Cooke has four young ladies - Misses Shaw, Warren, Peterson and Sutherland and Adam Sutherland, the only young man who is a member of his church, all in attendance. The opening singing service by Mr. & Mrs. McGranahan and others this evening, when they sing "Behold what manner of love", "We've sighted the Golden Gate", and other pieces, was very enjoyable. Then Rev. Ed. Kimball made a plea to raise money to pay the indebtedness which still rests upon the Yo-Semite Chapel, telling of the death of Miss Florence Hutchings and her devotion to that little chapel, how a Boston lady, hearing of it and her great choice that there should be an organ there, sent one which could not be put in till the debt on the house was raised. The debt was finally raised, though with difficulty. Rev. Mr. Whittle, the Evangelist, had been advertized to addressed the meeting, but being very weary, he begged to be excused, but as he was about to depart on the morrow, the Convention would not excuse him, so he preached a short sermon from the words found in Gal. 3.10,13. a very good address - earnest and powerful. I went back to the Grand Central, and Fanny Athearn roomed with me. Mrs. Bunn of Marin County, where Ida boarded while teaching near Valley Ford, was at the meeting with Nellie her little daughter, and they have gone out home in a buggy tonight with Ada, to spend the night, and get a sight of Ida. Mrs. Bunn is a very pleasant, cultivated woman. I also met in the parlor here today Lizzie Thomas - a bride - just married to a Mr. Peters. I afterwards met her with her husband, in bridal attire. Lizzie is a good, industrious girl, but I fear she has thrown herself away on a worthless fellow. (T.S.R. 48. 2 P.M. 81. S.S. 65.)