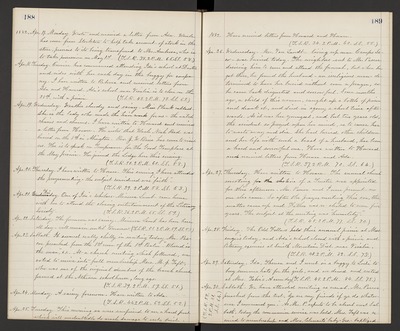 Apr. 18. Tuesday. Eunice has commenced attending Ida's school at Dexter and rides with her each day in the buggy for company. I have written to Rebecca and received letters from Ada and Howard. Ada's school near Visalia's is to close on the 28th with a picnic. (T.S.R. 43. 2 P.M. 73. S.S. 63.)

Apr. 19. Wednesday. Weather cloudy and rainy. Miss Plank called. She is the lady who made the hair work for us - the watch chains and charms. I have written to Howard and received a letter from Horace. He writes that Uncle Noah Reed was buried on the 8th in Abington. Rev. J.W. Brice has come to visit us. He is to speak on Temperance for the Good Templars at the May picnic. He joined the Lodge here this evening. (T.S.R. 50. 2 P.M. 60. S.S. 53.)

Apr. 23. Sabbath. It seemed really chilly in meeting today. Mr. Pascoe preached from the 1st verse of the 1st Psalm - "Blessed is the man," &.c. At a church meeting which followed, we voted to receive into full membership. Mrs. M.J. Taft, who was one of the original members of the branch church formed at the Athearn school house, long ago. (T.S.R. 39. 2 P.M. 59. S.S. 51.)

Apr. 25. Tuesday. This morning we were surprised to see a hard frost which will undoubtedly do much damage to early fruit.

Apr. 26. Wednesday. Mrs. Van Zandt - living up near Campo Seco - was buried today. The neighbors went to Mr. Pascoe desiring him to come and attend the funeral, but when he got there, he found the husband - are irreligious man-determined to have her buried without even a prayer, so he came back disgusted and sorrowful. Some months ago, a child of this woman, caught up a bottle of poison and drank it, and died in agony a short time afterwards. As it was her youngest, and but two years old, the accident so preyed upon her mind, as to cause her to waste away and die. She had buried other children and her life with such a beast of a husband, has been a hard and sorrowful one. Have written to Howard and received letters from Horace and Ada. (T.S.R. 37. 2 P.M. 70. S.S. 64.)

Apr. 27. Thursday. Have written to Horace. The annual church meeting for the election of a Trustee was appointed for this afternoon. Mr. Pascoe and I were present - no one else came. So after the prayer meeting this eve, the matter came up and Father was re-elected to serve five years. The subject at the meeting was "humility". (T.S.R. 45. 2 P.M. 77. S.S. 70.)

Apr. 30. Sabbath. We have attended meeting as usual. Mr. Pascoe preached from the text, "Ye are my friends if ye do whatever I command you." As Mr. P. experts to be absent next Sabbath, today the communion service was held. Mrs. Taft was received to membership and Mrs. Clements' baby - Geo. baptized. (T.S.R. 52. 2 P.M. 81. S.S. 64.)