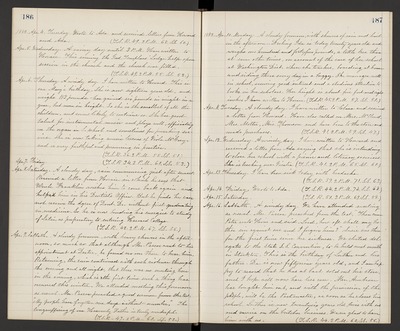 Apr. 6. Thursday. A windy day. I have written to Howard. This is our Mary's birthday. She is now eighteen years old, and weighs 113 pounds - has gained six pounds in weight in a year, but none in height. So she is the smallest of all the children, and seems likely to continue so. She has good talent for instrumental music and plays well, officiating on the organ in S. school and sometimes for preaching service. She is now taking music lessons of Viola McGary, and is very faithful and persevering in practice. (T.S.R. 36. 2 P.M. 55. S.S. 51.)

Apr. 8. Saturday. A cloudy day, rain commencing just after sunset. Received a letter from Horace in which he says that Uncle Franklin wishes him to come back again and help him in his Dentist's Office. But he finds he cannot receive the degree of Dent. Dr. without first graduating in medicine. So he is now bending his energies to study of Latin, a preparatory to entering Harvard College. (T.S.R. 42. 2 P.M. 67. S.S. 56.)

Apr. 9. Sabbath. A cloudy forenoon, with heavy showers in the afternoon, so much so that although Mr. Pascoe went to his appointment at Dexter, he found no one there to hear him. Returning, the rain continued with such violence through the evening and all night, that there was no meeting here in the evening, which is the first time such a thing has occurred this winter. We attended meeting this forenoon as usual. Mr. Pascoe preached a good sermon from the text "My people have forgotten me days without number." The longsuffering of our Heavenly Father is truly wonderful. (T.S.R. 47. 2 P.M. 60. S.S. 52.)

1882. Apr. 10. Monday. A cloudy forenoon, with showers of rain and hail in the afternoon. Darling Ida is today twenty years old and weighs one hundred and fortyfive pounds, a little less than at some other times, on account of the case of her school at Washington Dist. where she teaches, boarding at home and riding there every day in a buggy. She manages well in school, securing good interest and a studious attention to books in her scholars. Her height is about five feet and eight inches. I have written to Horace. (T.S.R. 45. 2 P.M. 57. S.S. 51.)

Apr. 12. Wednesday. A windy day. I have written to Howard and received a letter from Ada saying that she is intending to close her school with a picnic and literary exercised. She is teaching near Visalia. (T.S.R. 41. 2 P.M. 65. S.S. 60.)

Arp. 16. Sabbath. A windy day. We have attended meeting as usual. Mr. Pascoe preached from the text, "Then came Peter unto Him and said, Lord, how oft shall my brother sin against me and I forgive him?" Susie was there for the first time since her sickness. We elected delegates to the State S.S. Convention, to be held next month in Stockton. This is the birthday of Luther and his father. Dr. is now fiftynine years old, and I am happy to record that he has at last sold out his store, and I hope will now have less care. Mr. Ambrose has bought him out, and with the permission of the people, will be the Postmaster, as soon as he closes his school. Luther is now twentysix years old, lives with us and carries on the butcher business. We are glad to have him with us. (T.S.R. 44. 2 P.M. 60. S.S. 56.)