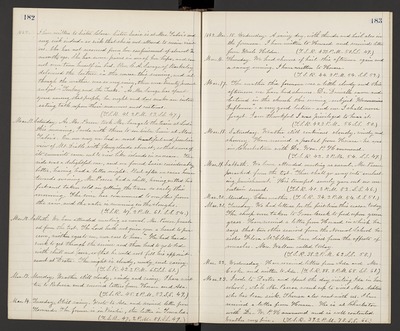 1882. I have written to Sister Clara. Sister Susie is at Mrs. Tabor's and very sick indeed - so sick that she is not allowed to received visitors. She has not recovered from her confinement of almost 2 months ago. She has severe pains in one of her hips, and cannot even turn herself in bed. Rev. C.A. Savage of Berkeley delivered the lecturer in the course this evening, and although the weather was so very rainy, there were twenty present subject - "Turkey and the Turks." As Mr. Savage has spent years among that people, he ought and does make an interesting talk upon their manners and customs. (T.S.R. 41. 2 P.M 53. S.S. 47.)

Mar. 11. Saturday. As Mr. Pascoe took Mr. Savage to the train at Lodi this morning, I rode with them to see Sister Susie at Mrs. Tabor's. On our way we had a most beautiful and peculiar view of Mt. Diablo with fleecy clouds above it, so that some of its summits came out to view like islands in an ocean. The ride was a delightful one, and we found Susie considerably better, having had a better night. But after we came home towards evening, Mr. Pascoe had a chill, having wetted his feet and taken cold in getting the team so early this morning. The river has commenced to over flow from the rain, and the water is running in the sloughs. (T.S.R. 47. 2 P.M. 61. S.S. 54.)

Mar. 12. Sabbath. We have attended meeting as usual. Mr. Pascoe preached from the text, The Lord hath not given you a heart to perceive, neither eyes to see, nor ears to hear." He had hard work to get through the service and then had to go to bed with chill and fever, so that he could not fill his appointment at Dexter. The night is cloudy, windy and rainy. (T.S.R. 42. 2 P.M. 65. S.S. 61.)

Mar. 17. The weather this forenoon was a little cloudy and this afternoon we have had showers. Dr. Dwinelle came and lectured in the church this evening - subject "Unconscious Influence" - a very good lecture - and one I shall never forget. I am thankful I was privileged to hear it. (T.S.R. 42. 2 P.M. 56. S.S. 50.)

Mar. 21. Tuesday. We had lettuce for the first time this season today. The sheep were taken to Goose Creek to feed upon green grass. Have received a letter from Howard in which he says that two other seniors from the Normal School besides Flora McClellan have died from the effects of measles. Mrs. Wallace called today. (T.S.R. 38. 2 P.M. 62. S.S. 58.)

Mar. 23. I rode to Dexter and spent the day visiting Ida in her school, while Mr. Pascoe went up to visit Mrs. Ashton who has been sick. Theresa also went with us. I have received a letter from Horace. He is at Charleston with Dr. W.P. Hammond and is well contented. Weather very fine. (T.S.R. 39. 2 P.M. 73. S.S. 66.)