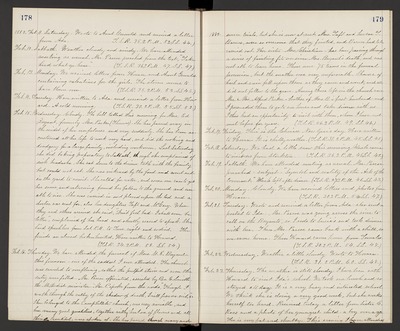 Feb. 15. Wednesday. Cloudy. The bell tolled this morning for Mrs. Ed Bryant, formerly Mrs. Parker (Thomas). She has passed away in the midst of her usefulness and very suddenly. She has been accustomed all her life to work very hard, and did the cooking and drudgery for a large family, including workmen. Last Saturday she did baking preparatory to Sabbath, though she complained of sick headache. She sat down to the dinner table with the family but could not eat. She was sickened by the food and went out in the yard to vomit. She called for water, and some one came to get her some and returning found her fallen to the ground and unable to rise. She was carried in and placed upon the bed and a doctor was sent for, also her daughters Taft and McGary. When they and others arrived she said, "Don't feel bad - I shall soon be better", complained of her head and shortly ceased to speak. She laid speechless from Sat. P.M. to Tues. night and so died. The friends are almost brokenhearted. Have written to Howard. (T.S.R. 34. 2 P.M. 58. S.S. 54.)

Feb. 16. Thursday. We have attended the funeral of Mrs. M.E. Bryant this forenoon - one of the saddest I ever attended. The church was crowded to overflowing, so that the pulpit stairs and even the entry were filled. Mr. Pascoe officiated, assisted by Rev. E. Smith the Methodist minister. Mr. P. spoke from the words, "Though I walk through the valley of the shadow of death, I will fear no evil," &.c. She belonged to the Campbellite church, was very amiable, and her many good qualities, together with her love of flowers and all things beautiful, were spoken of. She has passed through many and

1882. severe trials, but she is now at rest. Mrs. Taft and her son T. Barnes, were so overcome that they fainted, and Barnes had to be carried out. Her sister - Mrs. Christian - has been passing through a series of fainting fits ever since Mrs. Bryant's death, and was not able to leave home. There were 75 teams in the funeral procession, but the weather was very unfavorable. Showers of hail and rain fell upon them as they came and went, and all did not follow to the grave. Among those left in the church were Mr. & Mrs. Alfred Parker - brother of Mrs. B.'s first husband - and I persuaded them to go our house and take dinner with us. I thus had an opportunity to visit with them, whom I have not met before for years. (T.S.R. 46. 2. P.M. 49. S.S. 44.)

Feb. 23. Thursday. The weather is still cloudy. I have been with Howard to visit Ida's school. We took our lunch and so stayed all day. It is a very busy and interested school. We think she is doing a very good work, but she works herself too hard. Received today a letter from Sister C. Ross and a photo of her youngest child - a boy over a yr. He is very fat and chubby. This evening I have attended