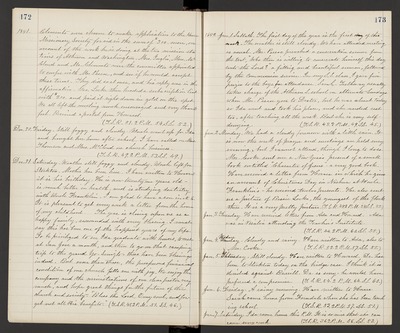 1881. Clements were chosen to make application to the Home Missionary Society for aid in the sum of $300. more, on account of the work he is doing at the two mission stations of Athearn and Washington. Mrs. Inglis, Mrs. McCloud and Mr. Clements were the committee appointed to confer with Mr. Pascoe, and see if he would accept these terms. They did so at once, and his reply was in the affirmative. Geo. Locke then headed a subscription list with $200. and paid it right down in gold on the spot. We all left the meeting much encouraged and very thankful. Received a postal from Howard. (T.S.R. 51. 2 P.M. 54. S.S. 52.)

Dec. 31. Saturday. Weather still foggy and cloudy. Uncle left for Stockton. Mother has been here. I have written to Horace it is his birthday. He is now twenty one years old - is much better in health, and is studying dentistry with Uncle Franklin. I am glad to have a son in N.E. It is pleasant to get every week a letter from the home of my childhood. The year is closing upon us as a happy family, surrounded with every blessing. I must say this has been one of the happiest years of my life. To be privileged to see Ida graduate with honors, to rest at San Jose a month, and then to go on that camping trip to the grand Yo-Semite - these have been blessings indeed. But more than these, the prosperous financial condition of our church fills me with joy. We enjoy the company and the ministrations of one dear pastor very much, and hope great things for the future of the church and society."Bless the Lord, O my soul, and forget not all His benefits." (T.S.R. 45. 2 P.M. 51. S.S. 46.)

1882. Jan. 1. Sabbath. The first day of the year is the first day of the week. The weather is still cloudy. We have attended meeting as usual. Mr. Pascoe preached a conservation sermon from the text, "Who then is willing to consecrate himself this day unto the Lord?" a fitting and beautiful sermon, followed by the Communion service. In my S.S. class, I gave five prizes to the boys for attendance. Saml. Tretheway usually takes charge of the Athearn S. school on alternate Sundays when Mr. Pascoe goes to Dexter, but he was absent today so Ida went and took his place, and she needed rest too, after teaching all the week. But she is very self-denying. (T.S.R. 43. 2 P.M. 49. S.S. 45.)

Jan. 2. Monday. We had a cloudy forenoon with a little rain. It is now the week of prayer and meetings are held every evening, but I cannot attend, though I long to do so. Mr. Cooke sent me a New year's present of a small book entitled "Character of Jesus" - a very good book. Have received a letter from Horace in which he gives an account of Christmas Day in Nashua at Uncle Franklin's - he received twelve presents. He also sent us a picture of Bessie Locke, the youngest of the flock there. It is a very pretty picture. (T.S.R. 48. 2 P.M. 58. S.S. 55.)