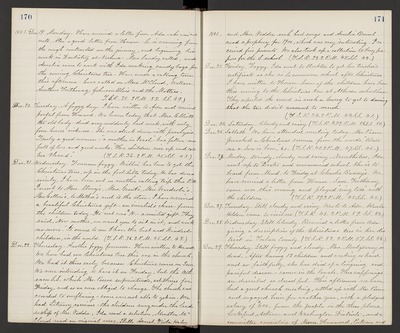 1881. Dec. 19. Monday. Have received a letter from Ada - she was not well. Also a good letter from Horace - he is recovering from the cough contracted on the journey, and beginning his work in Dentistry at Nashua. Mrs. Sandoz called, and Amelia came to work with Ida making candy bags for the coming Christmas tree. Have made a calling tons this afternoon - have called on Mrs. McCloud, Wallace, Authur Tretheway, Johnson Blois and the Motters. (T.S.R. 35. 2 P.M. 53. S.S. 49.)

Dec. 21. Wednesday. Forenoon foggy. Willie has been to get the Christmas tree, up in the foot hills today. He has done nicely. I have been out on another calling trip this P.M. I went to Mrs. Stacy's, Mrs. Graut's, Mrs. Wardrobe's, Mrs. Cotton's, to Mother's and to the store. I have received a beautiful Christmas gift - an invalid's chair - from the children today. Its cost was $18. - a united gift. They said, "Now mother, we want you to sit in it, and work no more." It seems to me I have the best and kindest children, in the world. (T.S.R. 36. 2 P.M. 45. S.S. 43.)

Dec. 22. Thursday. Another foggy forenoon. Have written to Howard. We have had our Christmas tree this eve in the church. We had it thus early because Christmas comes on Sun. We were intending to have it on Friday, but the Athearn S.S. which Mr. Pascoe superintends, set theirs for Friday, and so we were obliged to change. The church was crowded to overflowing - some were not able to get in. We had Literary exercises - the children sung under the leadership of Mrs. Vedder, Ida read a selection, Moulton McCloud read an original essay, Belle Arnest, Viola Haley

Dec. 23. Friday. Foggy. Ida went to Stockton to get her teacher's certificate as she is to commence school after Christmas. I have written to Horace. Some of the children have been this evening to the Christmas tree at Athearn school house. They reported the crowd in such a hurry to get to dancing that the tree didn't amount to much. (T.S.R. 324 2 P.M. 44. S.S. 41.)

Dec. 26. Monday. Windy, cloudy and rainy. Nevertheless, Ida went up to Dexter and commenced school. She is to board from Mond. to Friday at Charles Barney's. We have received a letter from Horace. Sam. Tretheway came over this evening and played "ring toss" with the children. (T.S.R. 39. 2 P.M. 45. S.S. 45.)

Dec. 29. Thursday. Still foggy and cloudy. Mrs. Montgomery is dead. After having 13 children and working so hard and so faithfully, she has died of lingering and painful disease - cancer in the bowels. Here sufferings are described as dreadful. This afternoon we have had a good church meeting, settled up with Mr. Pascoe and engaged him for another year, with a pledged salary of $600. from the people in the three places, Lockeford, Athearn and Washington Districts, and a committee consisting of Messrs. Hammond, Putnam and