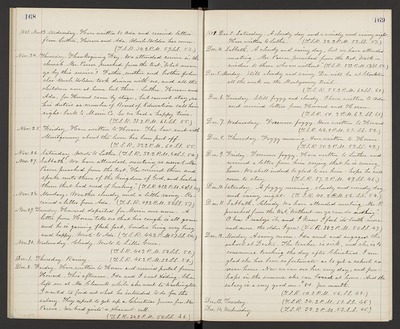 Nov. 24. Thursday. Thanksgiving Day. We attended service in the church. Mr. Pascoe preached from the text, "What mean ye by this service?" Father, mother and brother John also Uncle Holden took dinner with us, and all the children were at home but three - Luther, Horace and Ada, for Howard came by stage, but cannot stay, as his duties as member of Board of Education call him right back to Marin Co. So we had a happy time. (T.S.R. 31. 2 P.M. 61. S.S. 55.)

Dec. 2. Friday. Have written to Horace and received postal from Howard. This afternoon, Ida and I went riding. She left me at Mr. Clements while she went to Washington. I wanted to find out what he intended to do for the salary. They expect to get up a Christmas purse for Mr. Pascoe. We had quite a pleasant call. (T.S.R. 34. 2 P.M. 50. S.S. 46.)