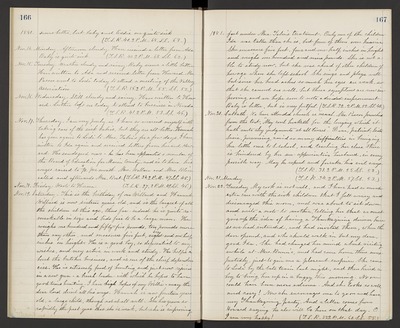 Nov. 17. Thursday. I am very poorly, as I have so wearied myself with taking care of the sick babies, but they are all better. Hannah has gone again to Lodi to Mrs. Tabor's for a few days. I have written to Ida again and received letters from her and Howard. He sends good news - he has been appointed a member of the Board of Education for Marin County and is to have his wages raised to $90. per month. Mrs. Wallace and Mrs. Blois called and afterwards Mrs. Bost. (T.S.R. 34. 2 P.M. 47. S.S. 45.)

Nov. 19. Saturday. This is the birthday of our Willard and Hannah. Willard is now sixteen years old, and is the largest of all the children at this age, thus far - indeed he is quite remarkable in size and bids fair to be a large man. He weighs one hundred and fifty-five pounds, ten pounds more than any other, and measures five feet, six and one-half inches in height. He is a good boy, so deferential to my wishes, and very active in work and study. He helps about the butcher business, and is one of the chief dependencies. He is extremely fond of hunting and just now rejoices in a new gun - a breech-loader - with which he hopes to have good times hunting. I have high hopes of my Willie - may the dear Lord direct all his ways. Hannah is now fourteen years old, a large child, though not at all well. She has grown so rapidly the past years that she is weak, but she is improving

1881. fast under Mrs. Tabor's treatment. Only of the children - Ida - was taller than she is, but four of them were heavier. She measures five feet, four and one-half inches in height and weighs one hundred and nine pounds. She is not able to study now, but she was ahead of other children of her age when she left school. She sings and plays well but since her head aches so much her eyes are weak, so that she cannot see well, but these symptoms are now improving and we hope soon to note a decided improvement. Baby is better, but is very fretful. (T.S.R. 32. 2 P.M. 52. S.S. 48.)

Nov. 20. Sabbath. We have attended church as usual. Mr. Pascoe preached from the text, "My soul breaketh for the longing which it hath unto thy judgments at all times." Dear, patient, Sister Susie, persevering amid so many difficulties in bringing her little ones to S. school, and teaching her class there is hindered by her un-appreciative husband, in every possible way. May he repent and forsake his evil ways. (T.S.R. 31. 2 P.M. 55. S.S. 52.)

Nov. 22. Tuesday. My cook is not well, and I have had so much extra care with the sick children that I felt weary and discouraged this morn, and was about to sit down and write a note to mother, telling her that we must give up the idea of having a Thanksgiving dinner here as we had intended, and had invited them, when the door opened, and who should walk in but my dear, good Ida. She had changed her mind about visiting awhile at Mrs. Bunn's, and had come home thus unexpectedly, just to give me a pleasant surprise. She came to Lodi by the late train last night, and then hired a boy to bring her up in a buggy this morning. No one could have been more welcome. And she looks so well and rosy! Now she encourages me to go on and have my Thanksgiving party. And a letter comes from Howard saying he also will be here on that day. O I am very happy. (T.S.R. 32. 2 P.M. 60. S.S. 55.)