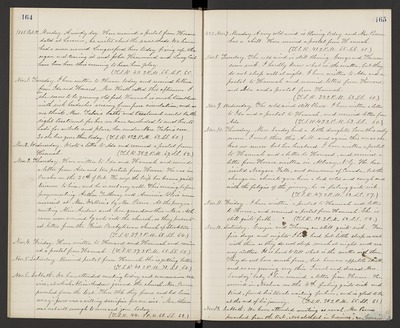 1881. Oct. 31. Monday. A windy day. Have received a postal from Horace dated at Laramie, he writes about the snow sheds. We have had a man named Langusford here today fixing up the organ and timing it and John Hammond and Lucy coil have been here this evening to hear him play. (T.S.R. 43. 2 P.M. 66. S.S. 65.)

Nov. 1. Tuesday. I have written to Horace today and received letters from Ida and Howard. Mrs. Heath called this afternoon. I see she seems to be growing old fast. Hannah is much troubled with sick headaches arising from poor circulation, and as we think Mrs. Tabor's baths and treatment would be the right treatment for her we have concluded to send her to Lodi for awhile and place her under Mrs. Tabor's care. So she has gone there today. (T.S.R. 42. 2 P.M. 63. S.S. 60.)

Nov. 3. Thursday. Have written to Ida and Hannah and received a letter from Ada and two postals from Horace. He was in Omaha on the 30th of Oct. He says the trip has become quite tiresome to him, and he is not very well. This evening, before prayermeeting, Arthur Tretheway and Arminia Blois were married at Mr. Wallace's by Mr. Pascoe. At the prayermeeting Alice Andrew and her grandmother - Mrs. Athearn were received by vote into the church, as they presented letters from the First Presbyterian church of Stockton. (T.S.R. 39 2 P.M. 68. S.S. 64.)

Nov. 6. Sabbath. We have attended meeting today and communion service, at which Alice Andrew joined the church. Mr. Pascoe preached from the text, "Then took they Jesus and led him away." Jesus was a willing sacrifice for our sins." Mrs. Athearn was not well enough to come and join today. (T.S.R. 44. 2 P.M. 68. S.S. 62.)

Nov. 8. Tuesday. The cold wind is still blowing. George and Theresa seem sick. I hardly know what is the matter, but they do not sleep well at night. I have written to Ada and a postal to Hannah and received letters from Howard and Ida and a postal from Hannah. (T.S.R. 33. 2 P.M. 63. S.S. 60.)

Nov. 10. Thursday. Mrs. Sandoz had a little daughter born this early morn. I went there this A.M. and again this eve as she has no nurse but her husband. I have written a postal to Hannah and a letter to Howard, and received a letter from Horace written in Albany, N.Y. He has visited Niagara Falls, and seen some of Canada, but the change in climate gave him a bad cold and cough and with the fatigue of the journey, he is feeling quite sick. (T.S.R. 47. 2 P.M. 62. S.S. 57.)

Nov. 12. Saturday. Georgie and Theresa are still quite sick. For five days and nights I have had but little sleep or rest with them as they do not sleep much at night and are very restless. It is hard to tell what is the matter with them. They do not have much fever, but have no appetite at all, and so are growing very thin I went and dressed Mrs. Sandoz' baby I have received a letter from Horace. He arrived in Nashua on the 4th feeling quite sick and tired, found his Uncle waiting for him, and is glad to be at the end of his journey. (T.S.R. 38. 2 P.M. 65. S.S. 61.)

Nov. 13. Sabbath. We have attended meeting as usual. Mr. Pascoe preached from the text, "Not slothful in business," &.c. Georgie