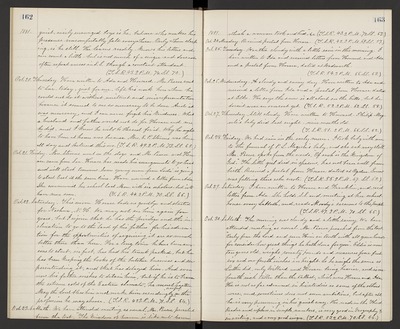 1881. quiet, easily managed boys is he, but one who makes his presence uncomfortably felt everywhere. Only when sleeping, is he still. He learns readily - knows his letters and can count a little - but is not much of a singer - and does not often repeat verses in S.S. though a constant attendant. (T.S.R. 43. 2 P.M. 74. S.S. 70.)

Oct. 20. Thursday. Have written to Ada and Howard. Mr. Pascoe went to Sac. today, just for me, left his work here when he could not do it without mistrust and misrepresentation because it seemed to me so necessary to be done. And it was necessary, and I can never forget his kindness. What a husband and father would not do for Horace and me, he did, and I know he will be blessed for it. Why he might to have been at home was because Mrs. E.P. Stevens was here all day and lectured this eve. (T.S.R. 49. 2 P.M. 73. S.S. 65.)

Oct. 21. Friday. Mrs. Stevens went on the stage and Mr. Pascoe and Horace came from Sac. Horace has made his arrangements to go East and will start tomorrow. Some young man from Lodi is going to start East at the same time. Have received a letter from Ada. She commenced her school last Mon. with six scholars - but is to have more soon. (T.S.R. 44. 2 P.M. 70. S.S. 66.)

Oct. 22. Saturday. This morn. Horace bade us goodbye and started for Nashua, N.H. We may not see him again for years, but I rejoice that he has the privilege and the inclination to go to the "land of his fathers" for his education for the opportunities of acquiring it are so much better there than here. For a long time he has been anxious to start, in fact, has had his trunk packed, but he has been keeping the books of the butcher business and superintending it, and that has delayed him. And even now his father wishes to detain him, but if he is to brave the extreme cold of the Eastern climate, he must hasten. May the Lord bless him and make him exceedingly useful in the profession he may choose. (T.S.R. 42. 2 P.M. 71. S.S. 64.)

Oct. 23. Sabbath. We have attended meeting as usual. Mr. Pascoe preached from the text, "The kingdom of heaven is like unto heaven

Oct. 28. Friday. We had rain in the early morn. I took baby with me to the funeral of P.L. Megerle's baby, and she sat very still. Mr. Pascoe spoke from the words, "Of such is the kingdom of God." The little girl died in spasms, has not been well from birth. Received a postal from Horace dated at Ogden. Snow was falling there as she wrote. (T.S.R. 55. 2 P.M. 67. S.S. 63.)

Oct. 30. Sabbath. The morning was cloudy and a little rainy. We have attended meeting as usual. Mr. Pascoe preached from the text, "Only fear the Lord and serve Him in truth with all your heart, for consider how great things he hath done for you." Eddie is now ten years old, weighs seventy pounds and measures four feet six and one-fourth inches in height. So he weighs the same as Luther did, only Willard and Horace being heavier, and is one-fourth inch taller than the tallest, which were Horace and Ida. He is not as far advanced in his studies as some of the others were, and sometimes does not seem ambitious, but after all he is very persevering in his quiet way. He reads in the Third Reader and ciphers in simple numbers, is very good in Geography & in writing, and a very good singer. (T.S.R. 53. 2 P.M. 70. S.S. 64.)