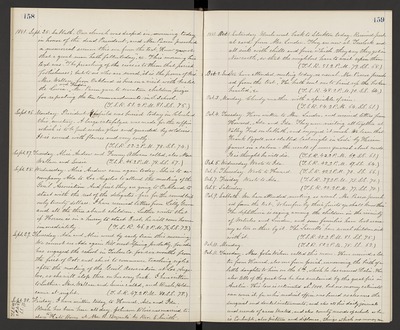 1881. Sept. 25. Sabbath. Our church was draped in mourning today in honor of the dead President, and Mr. Pascoe preached a memorial sermon this eve from the text, "Know ye not that a great man hath fallen today," &.c. This morning his text was - "The preaching of the cross is to them that perish foolishness; but to us who are saved, it is the power of God." Mrs. Wallace from Oakland is here on a visit with her little Lucia and Freddie. Mr. Pascoe gave to seventeen children prizes for repeating the ten commandments in S. School. (T.S.R. 51. 2 P.M. 81. S.S. 75.)

Sept. 26. Monday. President Garfield was buried today in Cleveland Ohio, cemetery. A large catafalque was made for the coffin which is to be put under glass and guarded by soldiers. It is covered with flowers and very costly. (T.S.R. 52. 2 P.M. 78. S.S. 74.)

Sept. 28. Wednesday. Alice Andrew came again today. She is to accompany Ada to Los Angelos to attend the meeting of the Gen'l Association And first they are going to Oakland to start with the rest of the delegates - fare for the round trip only twenty dollars. I have received letters from Lilly Greve and all the three absent children. Luther writes that if Horace is in a hurry to start East, he will come home immediately. (T.S.R. 46. 2 P.M. 76. S.S. 73.)

Sept. 29. Thursday. Ada and Alice went by early train this morning. We cannot see Ada again till next Spring probably, for she has engaged the school in Tulare Co. for six months from the first of Oct. and she is to commence teaching right after the meeting of the Gen'l Association at Los Angelos, so she will stop there on her way back. I have written to Luther. Mrs. Wallace and Susie called, and Uncle Holden came at night. (T.S.R. 47. 2 P.M. 80. S.S. 73.)

Oct. 4. Tuesday. Have written to Mrs. Lander, and received letters from Howard, Ada and Ida. They were visiting all together at Valley Ford on Sabbath, and enjoyed it much. We learn that Frank Pygall was stabbed last night in Lodi by Hiram James in a saloon - the result of some quarrel about cards. It is thought he will die. (T.S.R. 42. 2 P.M. 69. S.S. 61.)

Oct. 9. Sabbath. We have attended meeting as usual. Mr. Pascoe preached from the text, "Wherefore by their fruits ye shall know them." The diphtheria is raging among the children in the vicinity of Waterloo and Linden, and some families have lost as many as two or three by it. The "Laswells" have several children sick with it. (T.S.R. 42. 2 P.M. 81. S.S. 75.)

Oct. 11. Tuesday. Mrs. John Wilson called this morn. Have received a letter from Howard, also one from Josiah, announcing the birth of a little daughter to him on the 6th, which he has named Delia. He also tells of the great loss he has sustained by the great fire in Austin. His loss is estimated at $1000. but no money estimate can cover it, for as his medical office was burned so also were the surgical and dental instruments, and also all his daily journals and records of cases treated, and also county records of schools as he is Co. Supt., also pictures and diplomas, things which no money can